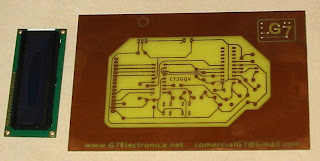 It was sent to me by CT5JZX who took care of ordering them. He is also making one for his own use. I opted for a PCB and not my normal method since I got the LCD and board for the same price of the LCD cost in the local electronics shop....and my callsign is stamped in the board :)

Now I must program the PIC and find (buy) the LC72131. Will also cut the unnecessary parts of the board since I don't think there's room in the master board to accommodate this one.

The schematic and "software" is from: PY2EAJ, Euclides, and you can see more at: http://rf.w2c.com.br/PllLC72131.aspx
and also here: http://py2ohh.w2c.com.br/trx/2mpll/2mpll.htm
with some description in English.
Publicada por Ricardo - CT2GQV em 12:10 PM No comments: 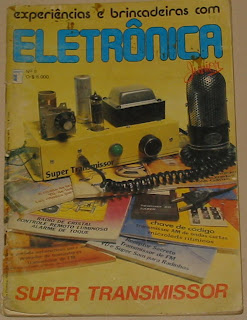 Still searching for lost magazines and some old projects and this weekend I came up with the magazine that had two of my very first projects: 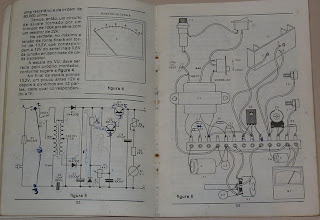 Incidentally the schematic had the wrong value on the zener resistor but I managed to figure that one out. I still have the original box were I placed this assembly. 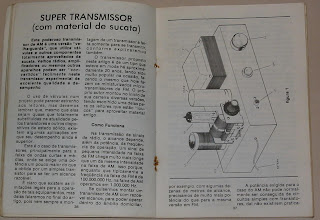 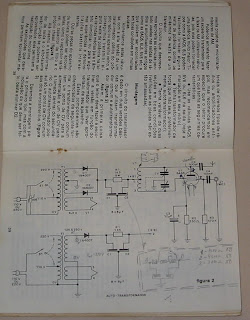 Luckily for me I never finished this project, I didn't had the transformer and if I remember I connected, just for a quick test, directly to the mains power supply with an half bridge rectifier, of course it didn't worked, there were no return power line but if I had continued I was going for sure to put my finger there.... that would no be very nice to see.
I still have to find the board and components.

The magazine doesn't have a date stamped but some comercials refer that the prices are valid before 15 Feb 1986 so it's before that....

Well it was another weekend and another beach... here's my attempt to make a panoramic image holding the camera by hand and using the panorama script on "gimp" for the first time... sorry for the quality but at least I had a nice beach day.

Decided that the aluminium box I "found" is going to be used for an VHF FM transceiver, in fact there is going to be an transmitter and a receiver independently, that's due to design. Transmitter is a FM modulated VCO, PLL controlled at the tx frequency and receiver is a 10.7Mhz IF conversion with an Si570 kit VFO.

Its always a problem to make big holes in an aluminium front panel, for pot's and switches a simple drill is enough but for larger holes unless you have a punching machine available there's not many ways of doing this.
Here's the method I use: 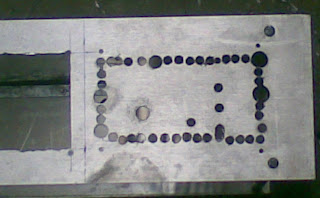 First mark the boundaries and start your driller...for cuting the aluminium bettwen holes I used the drill bit edges. Use a lime to round the remaining aluminium....and, voilá, gives a lot of work but it works...sort off..will improve this for final assembly.

Now I am just waiting for the lcd to make the final assembly, probably I will use two different antenas, one for RX the other for TX and I am still developing the 1W VHF output amp for this transmitter. 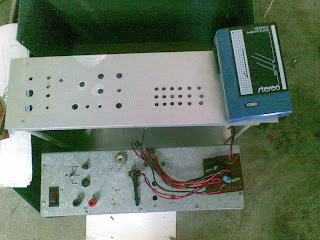 For some time I was searching for this box (the one below), I knew I had it somewhere, last weekend I found it. The box was originally intended to make a bench power supply with multiple outputs (I bough at that time all the 78/79XX series of regulators values including for instance the 8V version.) and was built to my specs in a metal craft shop (at that time the closest electronics components shop was 30Km away, now the closest is 88Km..., I am not living in the same place, here is just 5km away). As a bonus I found an aluminum box I had forgot about and probably was to be used also in a multiple output bench power supply. If I recall the cassette player was used for music transmitting on my first ever transmitter...an FM 88-108Mhz one.... not everybody is perfect! Also found a board with some L200 regulators most probably for the power supply.

On the photo bellow you can see part of a schematic (also found) I think was for a school project of an digital thermometer using an temperature sensor, analog to digital converter and 7 segment displays...looking back, I must admire my past work...today I would probably search google... not avaiable in those times, only the local library and some brain power! 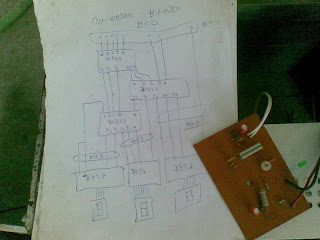 The board was an CB amplifier (if I recall), I guess I never finished it due the price of the output transistor, the only component not fitted. I marked the board with 94...so it's 1994... long time before my ham license :)
....I still have to find the board and the valve I had to make an AM (MF) transmiter, I know I have that somewere...that would make my day!

Now, the nice part is I got one "free" box, so why not using it to place another homebrew radio.
Some holes later and some grinding... here's the outcome. If you see the original aspect it was of no good as it was... you can say now it's even worse!

Removed the front panel of the airband receiver (it's only the Si570, the butons and the meter, fited the speaker and "voilá". 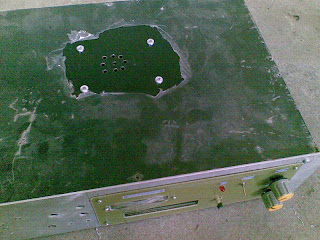 Now what shall I do with this...

My idea is to fit my new VHF receiver (the one using an SBL-1) but there's space on the left that can be used for this options, but, I am open to sujestions:

1 - An hf receiver comonly using the Si570 vfo.
2 - The companion VHF transmiter (still waiting for the pll board).
3 - A speaker grill, thus, removing the top speaker.
4 - Some input's and outputs plugs to be used as a test box
5 - A blank plate with a nice logo...
Publicada por Ricardo - CT2GQV em 9:27 PM No comments: 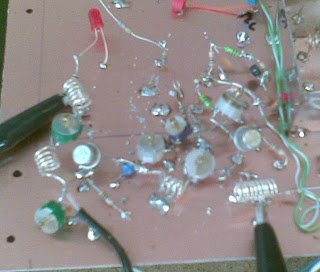 ..Still hot around here, so no soldering but here are some photos of the 1 W amplifier experiments. The amplifier is the part on the low side of the picture, the spare part is reserved for the PLL, the righ side of the board is the FM oscillator and Tone generator already done.
I have one amperimeter in each transistor to check for transistor drive since I already broke one with excess current. 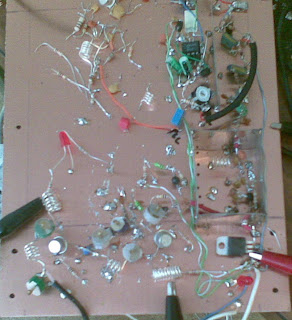 As soon as I finish the amplifier, will post here the schematic, for now the number of variable cap's is to much but it's the best way to make experiments.

And for those experiencing winter here's another beach photo from last weekend! 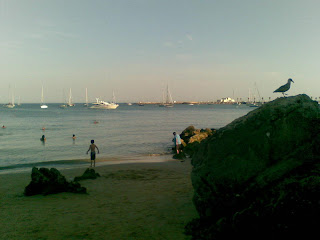