As stated on a previous post of the FT-707 repair series I had to remove two coils from the 10m A and B local premix oscillator, to use on the 40 and 30m band because there was a previous owner that really made a mess out of it.
Now I'm the the process of finding replacement ones, the coils are a non existing item and there is not much information on their specs so I got some coils from the junk bin and started to find which ones would work by winding them on a trial and error process.
For that I replicated the oscillator part from the technical manual on a small PCB: 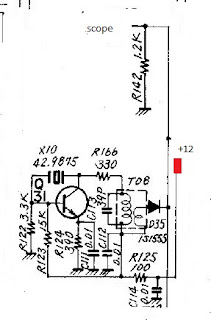 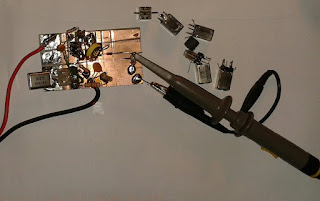 ..this way it's easier to test multiple coils.

The output of the circuit looks similar to this when the coil is ressonant or near ressonance:

After some testing I already have one coil finished and in place, it's not perfect but for now fits the bill: 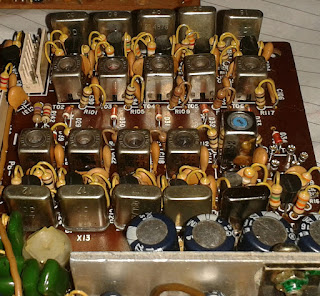 I used some IC terminals to test in the board also and if needed replacing latter on: 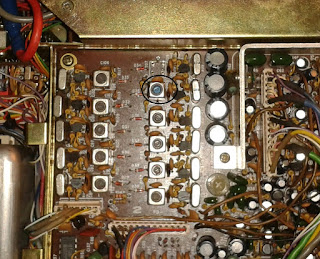 ..it was easier this way to avoid do much soldering on the board.

The coil is marked "3392" and comes from an unknown board that my guess was used on a wallkie-talkie (has cristal holders and a side switch), whatever that coil match's in terms of specs or inductance to is unknown to me, I have to build and inductance meter yet.
I run 2 turns for the secondary and 6 for the primary for 10m B band, the removal or increase in the coil number is done by testing with a crystal upper in frequency and also lower of the main one for test and see if the output increases or decreases, eg: if more amplitude on a 50Mhz than on a 35Mhz for a 42Mhz center frequency I assume the higher the amplitude the closer to the resonance frequency so has low inductance and more turns needed (keeping the same parallel cap, 39pf).

If you look closer still missing the first coil for the 10mA, top of the right column of coils, I already have one tested, just not in place, marked "3410 E 0" that works with a 14Mhz crystal (42Mhz overtone), just waiting to find a suitable crystal for 42.5Mhz, the one I previously placed there doesn't want to oscillate on overtone, was placed before proper testing and was removed.

... except that the band is already on the correct band position...as soon as I have the 10m A in place I might leave 10m C and D with the CB frequencies :)


Have a nice week,

Arduino digital out, 4 to 16 decoder/demultiplexer

Controlling the VFO for the "Trevo" transceiver from the Arduino poses a small problem, the Arduino doesn't have enough output lines to control all the bandpass filters so I had to come up with a solution. There are some I2C IC's that would expand the digital output pins and do the job but I think that's like killing flies with a cannon so I went to a more "old school" approach.

The 4514 series IC used here, in high speed version (HCT not realy needed), is a 4 to 16 decoder with input latches, the latches are not needed on this case since there will be no signal change from the command lines.

Basically you input a 4 bit (parallel) binary and you have 16 digital outputs according to the truth table here: 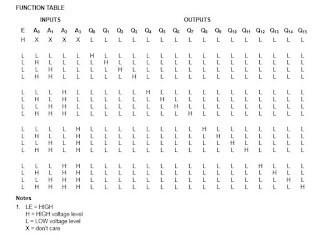 And the control schematic from the Arduino: 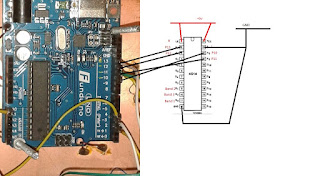 
...now I still have to code the rest so that a band change activates the correct output...

Have a nice weekend!
Publicada por Ricardo - CT2GQV em 11:33 AM No comments:

Here's some of the passive mixers I normaly use. 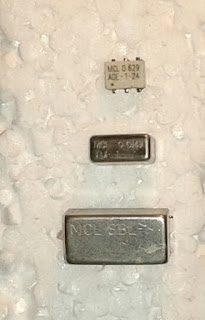 I've been experiencing with the ADE-1 using the IF out as input for the VLF range and it works nicely, contrary to one could think. I'll post in the future the experiments.
I'm also favoring more this mixer since it's the cheapest of the 3.

The SBL-1 I use in HF range but also made a VHF transceiver using it for the reception part.

The TUF-1 only used it on the "Speaky" kit, might replace the ADE-1 in the "Trevo" transceiver design with it.

Looking back, this is the 9th issue found between the two sets, hopefully will be the last!

I started looking at the diagram, for sure the issue is in the connection to the external VFO, the VFO ligt's and controls the radio if you press the RX but no frequency, only the 91Mhz symptoms of no VFO: 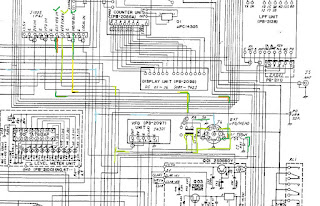 Started by testing the switch inside the plug with a make shift adapter (the shield of a plug): 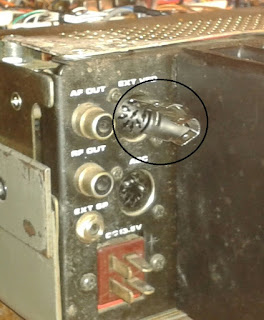 One of the poles in the plug swithc put's inline a 50 ohm resistor so it's easy to test from the RF board, pin 3 of J05 "memo out".

All the connections were tested and all with continuity....what is going one here? Something is not right!

Let's bring the heavy troubleshooting stuff.... the oscilloscope, before that,  just powered on the radio once more and the external VFO was working!... Hum!?, probably the contact creaner I aplied on the swithc changed things... good, let's close the lid before it breaks again.... then is when it stops again, ahhh, a broken cable for sure, some touches on the cables and voila the culpit (external vfo in): 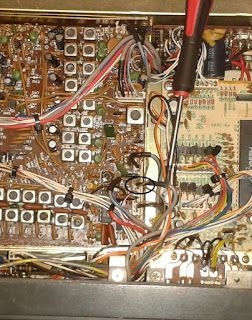 The press of the lid against the cable would disconnect and that's why when I did the testing it was all ok. live and learn!

For now this will end the FT-707 repair series, they only need a god tuning and some cleanup, if something major "arrives" will post here. 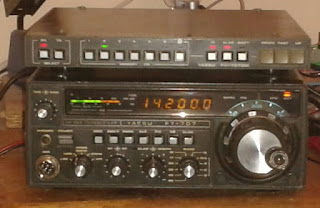 This one was not obvious for me, still isn't completely understood, only fixed, one of the reasons for not "getting there" faster was I was also having low to none output on 20m, so was suspecting something on the bandpass filters or the associated switching circuit. The filter weren't making much sense because reception was good...it had to be something else.
As soon as I figure out that low output on 20m was due to improper bandpass tune it become obvious which way to go for finding the actual issue.

This is the board in question and the problem is around there...(RF unit PB2093b) !: 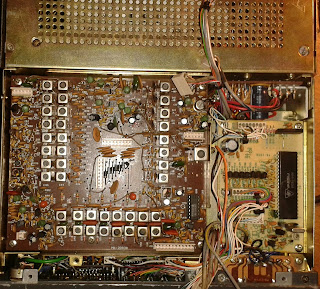 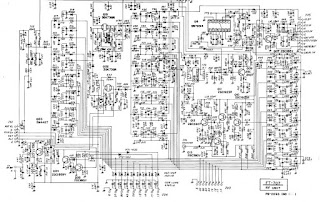 So what I did was disconnecting the output to the PA and place the scope to check for the level before amplification, after "tuning" the 20m band filter only no power on 12 , 17 and 30m band... so what is common between the bands and only on the TX circuit if I excluded the filters?: 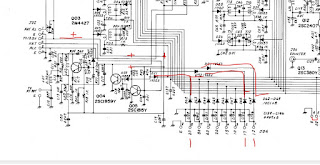 So it was starting to be obvious that the issue was with the associate circuit of Q04, started measuring on the anode of D20 and noticed the bias was smaller every time I selected 12, 17 or 30m band and keyed the transmitter, the bias is also dependent on TX 13.8 (pin 3) from J02 plug, so for each test transmitting must be done. The only cause of smaller bias can only be diodes  D21, D71 and D72, impossible for 3 diodes to be out of spec/broken at the same time and since the voltage droped they were for sure working (an open diode would keep the bias high and a short one very low, was not the case in either). So I lifted the diodes and voila', everything back to life. I'm sure the actual "fault" is somewere else, measured R06 and is spot on so could be any of the other parts. As soon as I have patience and more time will try to dig furter.
I think Yaesu might have placed the 3 diodes in the circuit after checking that probably some bands had excessive power and that as a way to limit a little on the output since the diodes will drop the bias lower and the series of D20 with the PN junction from base to emitter, at the moment I see no other reason for the use of the diodes there and only on these 3 bands, it should not be curing any instability since the band's are not even sequential.... 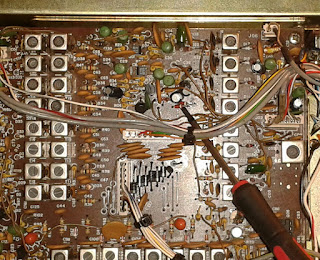 And already outputing some power into a dummy load with the watt-meter in the 15W scale and the carrier control fully counter-clockwise (low output). 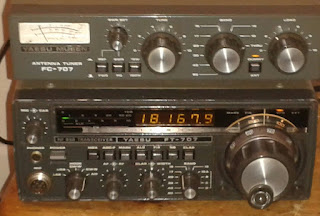 ..I will leave as it is for now, at least this unit I can consider as fully operational....

On to the next unit, the blue light one!