Just some photos on projects waiting calibration and a decent front panel decoration:

The AD8307 power meter bellow on the photo. On top an store bought LCD panel meter placed in a box for measuring the voltage output of the power meter, here with -10dbm input signal but lacking calibration.... 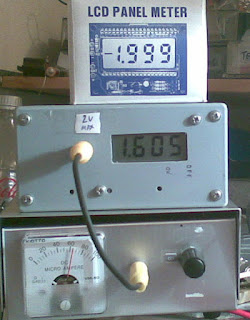 Looking back I should had placed the AD8307 signal input on the front and the measure voltage on the back....hum...I have an UHF panel mount plug somewhere....will see.
The box of the DVM was one that housed my first ever working transmitter, an 88-108Mhz FM one...at least more than 22 years already passed... 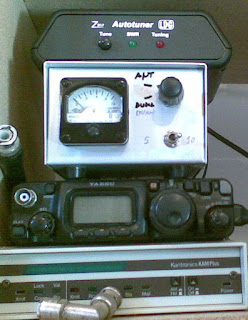 The 90º angle silver plated BNC plug near the Kantronics was a kind donation from a friend and fits nicely on the FT-817 front panel, leaving space for the select button.

Spotted this page and decided to try this unusual variable capacitor idea, I had an 20cm heat sink laying around so splited it in two to see the results.

We can "juice" just a little bit more getting the plates closer. 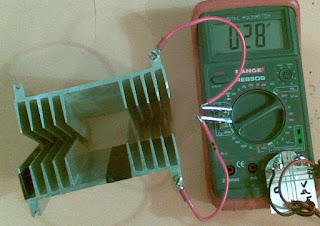 There's just a small problem, it takes some space and the mechanical parts are not easy to make but should be easier to build than a classical unit. Regarding the price, this "unit" cost'd me 7 Eur some years ago. Now the 20cm heat sink costs 11 Eur (dam inflation), total cost for a typical 400pF for an ATU should be around 22 euros, plus the hardware for turning.... sometimes we can get cheaper caps in ham swaps.
One big advantage of this design is that there are no wiper connections so lower losses and no risk of bad connections.
As far as breakdown voltage, considering 30Kv/cm in normal conditions we can assume that at least 1mm separation gives 3Kv... but on a safe side I would consider just 1Kv...

....I think in the future I'm going to rebuilt my antenna tuner/matcher. 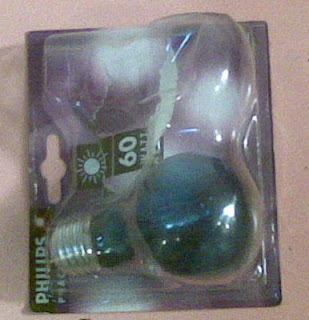 This particular light bulb model is getting each time harder to find. The one I have as the bench head lamp just broke about 2 years ago and I've been using a "normal" one ever since. Been looking all over the city shops in the past months an not one stock them anymore.

So, what's different about this particular light bulb, well for a start the light color, daylight blue, is very good for long reading periods and I found that is extremely nice also for for long periods of soldering at the bench so I use it as the main head lamp over the soldering area. For me it works really nice, there are similar lamps in the marked but their of painted glass, not this model, it's the glass that has the blue color. I also found this particular lamp to be best suited for reading small components markings.


Luckily last week during some garbage removal I found one that I had kept as spare! Lucky me to keep a spare, anyhow will continue to search another unobtainium light bulb.
Publicada por Ricardo - CT2GQV em 10:39 PM No comments:

Some days I like to build radios, others fix things, now I am in the mood to make and fix test equipment. I started with my oscilloscope, not fixed yet but I think I will get there.... also doing a rebuilt of the AD8307 meter, after, I will calibrate it. For that (and other stuff) one thing needed is an attenuator pad. 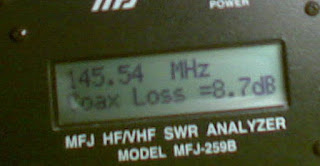 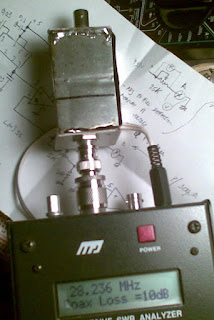 Good until 28Mhz, then starts decreasing. 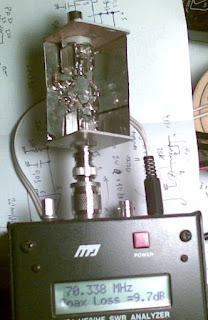 Not very critical for the intended propose. 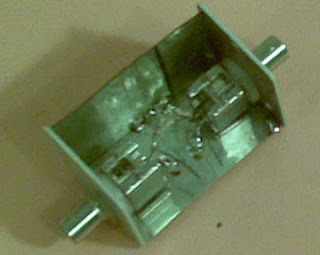 The BNC plugs came from an old telco modem, I had the pcb pieces and the foil, the resistors some were from old boards (I am recycling lot's of components) and others from my stock.
It's not perfect but was cheap and will do!

Came from here, by the way, a great place with lot's of useful information.

Sometimes I have to measure caps but when their leads are small they don't fit in the meter, so I came up with this adapter...using just two little pieces of PCB and alligator claws. 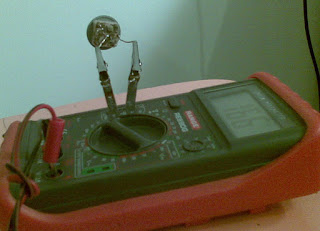 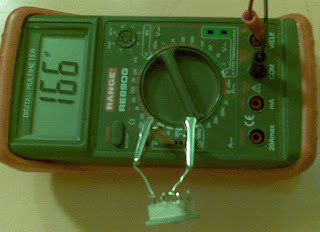 I was sure it had more capacity....

Still have solder a little pcb to fix the 2 parts together.... 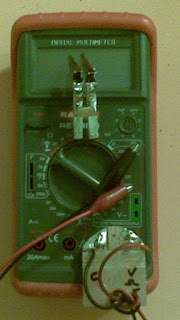 before you think... the "bridge" holding the two parts is soldered but isolated....

...and meanwhile I add an adapter for the resistance, voltage and frequency of the multimeter, I like to use thin wire for the leads and they tend to break on the banana plugs due to heavy use (look close on first and second photo), this way I hope they last longer...

This multimeter has been a real workhorse (and was considerably cheap), considering the abuse already suffered, a miracle it's still working.

At 11UTC on 15 October 2012, the winners of the Nine Islands Lottery were selected by Club Log, using a randomised computer selection process.
In the first draw, there were a total of 11,404 tickets from those stations who worked 5 or more islands. The prize was won by OS6A, Filip Coysman.
In the second draw, the first 25 stations to work nine islands were eligible. The prize was won by G3ZSS, Peter Bacon.
Congratulations to the winners and thank you to everyone who participated in the Azores Nine Islands Hunt!
VisitAzores.com..."

So... I have to wait a little more to visit the Azores!

One thing is sure...at least 11404 hams were active that day and worked 5 islands!

Had lot's of fun making the QSO's. I wasn't so much time on the radio for a long time!
Publicada por Ricardo - CT2GQV em 8:22 PM No comments:

Yesterday before leaving the shack I turned on my little CB/10m radio... 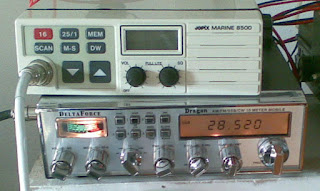 Ivo, OK2BGW was calling DX and I answered, honestly I was not expecting a reply since I was using the indoor antenna... 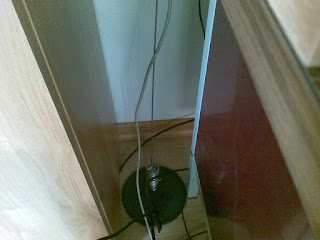 And here's the result after some patience from Ivo fighting QRM (I think it was more low signal from my part):

First QSO with this radio and on this log book...not that my other loogbook is fuller.

Others were using something like 1 and 2 W on 10m this weekend, everybody going "green"? Not me, I used an wooping 20W!

If propagation continues like this I'l probably make more QSO's on 10...


After some blind testing and a lot of debugging: 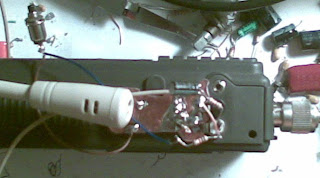 ...here's the external mic/ptt schematic for the Telemobile HX-340 handie 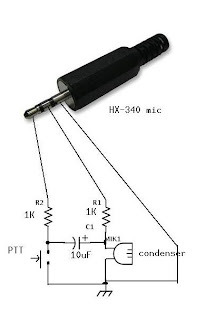 Without a schematic of the radio I have no idea if this is the best way for connecting an external mic/ptt but, anyhow, it worked.
Audio is not perfect but workable and can be tailored with a better mic or slight change on the bypass cap.

After some initial frustration mainly by the lack of schematic and manual for the HX340 I found some information that wanted to test to see if the radio was easily programed.
In my first tests I was using a programer similar to an M-bus programer but that information was wrong (don't believe everything on the internet!), the Telemobile HX340 uses a simple TX/RX interface.

The correct information and correct software came from a post by EA3CWT in the URE forum, and I can only add that the "M" button on the radio should be pressed for reading and depressed for saving/program the data (switch on and off the radio to change state).

The computer used for programing, a Compaq PIII 500Mhz, the slowest working machine I have at the moment, apparently as with many old DOS software, the correct timing on the "com" port is dependent on a slow CPU:
The software didn't run well on a newer/faster pentium class machine. 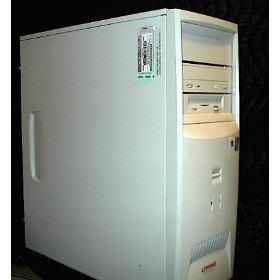 Schematic from the RS232 DB9 to the programing plug on the radio: 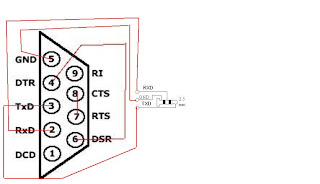 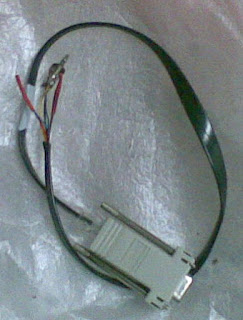 The programmer software as per the URE post is here: http://www.ure.es/yabbfiles/Attachments/Hr-340.zip

And I used an Windows 98 DOS install (less the windows setup part) disk but it should run in any DOS boot diskette.

And now the programed equipment, for my frequencies, with the bottom lid placed and ready for some action... one of this days... because I have to program/test the other unit and do an external mic/speaker cable.

In a previously blogged equipment exchange I got 3 channelized Telemobile HX340 mobile radios. One was completely dead the other ok and programed with some repeater frequencies and the last one after the keyboard replacement (with the dead unit one) I think is now OK and only needs programing.
Problem is that all the radios came without the 9.6V battery pack.

Since new batteries are expensive I had to brew my ow solution. I must say that I have no interest in putting new batteries in them since they will be operated at a fix position and from a 12v power supply.

So I came up with this simple fix for the problem....that is, built a fixed battery holder... 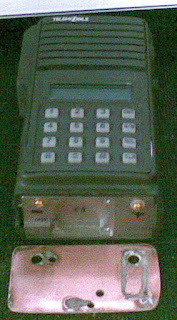 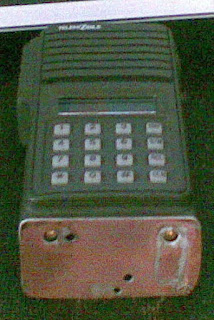 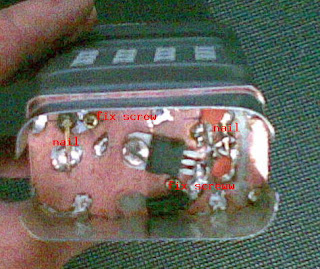 The fix crews make pressure for the nails against the terminals and use already in the unit fixing points.
Regulator is a 7810 but the radio only need's 9.6V... it works.
Incidentally the power pins in the radio are easily soldered so I could had opted for a simpler solution (without the pressure brass nails), just the wires soldered directly to the terminals....maybe will do that on the other unit.
A bottom plug is also ready but I didn't sealed the unit yet, I have to get one panel power input plug and fit it on the side.

Now I only need to program the units for the frequencies that I want....and that will be another story....
Publicada por Ricardo - CT2GQV em 4:25 PM No comments:

Now that I have the FT-817 I need something to program the rig on an easy way since the buttons are a little on the small size....

Grabbed the first schematic that I encountered.

Made some changes, actually one change, and voila: it's working... 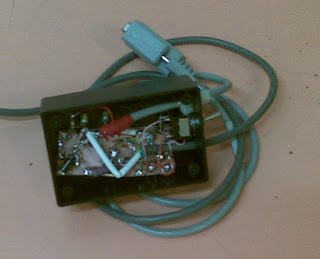 Here's the windows FT-817 commander software, and older version since now it's integrated in "Ham Radio Deluxe" but it's enough for me. 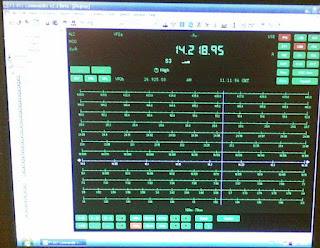 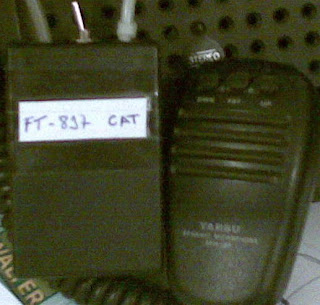