After almost two month after arriving to this Island (Ireland) I decided it's time to restart my soldering activities.
Since I didn't had space to bring my shack with me, when I flew in, I opted to bring just a small container of hard to find components, what I didn't knew is that all electronic component are hard to find here.
After some search I found only one company selling electronics around and for getting things worst is one that nowadays is more focused in ready made stuff, oh well..., they still sell you a resistor, if its on their catalog....but you will pay premium price! I will never complain again on the prices back home!

Anyhow, after the initial shock I managed to buy some stuff need, other will have to be sourced in the Internet and back home.

here's my shack "equipment" so far: 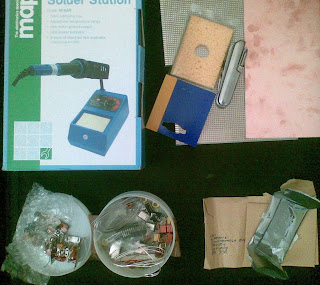 Top row was bough yesterday, a soldering "station", cheap and according to a fellow ham, durable. Got also a spare sponge since the one in the kit is very small. Two pcb's for rapid prototyping and one for more definitive setup, also sourced a cheap knife on a pound shop for making traces on the pcb and to remove insulation from wires.
Bottom row: On the left, the box of components that come with me on the plane and on the right two minicircuits rf amp in static protection on top of the letter that bring them. An ofter from a nice fellow ham living on the north side of  the island East of this one. By the way, there's no island to West, just a big pond...

Now the idea is to start building a new receiver, first the audio amplifier and rf preamp and then all the circuits in the middle! Easy!

Stay tuned and have a nice week!