Summer and 1W at VHF

Summer is here....so until at least end of August there will be few chances to spend some quality time in the shack (eg: doing soldering). Today at 22H00 there were still 36ºC inside the shack and it's isolated, I wonder if it wasn't.
Anyhow managed to make some more tests on the amplifier for the VHF FM transmitter I am building from my own schematic, since the ones I found were using un-existing components locally or were using dubious components for the function...namely frequency limit. For now I am getting already an impressive 100mW (more or less the test probe accuracy) from a 1.6mW input .... funny is that in the first tests I made (sightly different design) I managed at least 1W output first time (didn't measured exactly but the 1W dummy load was getting pretty warm), unfortunately it was not stable. The 100mW I am getting are "made" at the expense of 2.4W DC power so there's a long way to improve.
I Started from a design including 2n2219A, 2n3866 and a 2n3553 transistors but since the 2n3553 is 3 Eur cheaper than the 3866 (go and figure this one out...) I am now in the second stage of the 3 stage 2n3553 amplifier. Hope to get 1W when the third stage is complete. As always the schematic will be placed here when is fully tested and stable enough... not like many designs found in the internet.
One thing is for sure, you can easily get 1W at HF but to get 1W at VHF is a different story. After the 1W is accomplished the final 5W I want will be using an amplifier module, cheaper than the transistors needed for getting the 5W power mark.
Will continue this story, hopefully in short time...

Meanwhile have a nice summer.. or winter if your live in the southern hemisfere...

This time a photo from last weekend, and hopefully the next one, beach:

p.s. not mine the photo but will take and post some in the future.
Publicada por Ricardo - CT2GQV em 1:05 AM No comments:

Due to time constraints and the hot weather I haven't much possibility to make some soldering's so decided to make some labels since that doesn't involve soldering.
This is my first try on one possible method for labeling, basicaly it's a normal paper (on inkjet printer) print of the labels and then placed on the front panel with transparent paper over them (with glue on one side).

Care must be taken to place the label in the transparent paper so it doesn't fit in an angle as you can probably can spot on some of them.

The print was made with "Openoffice calc" software (a spreadsheet). I learn't only after printing that it's better to fit the cell size to the text size avoiding cutting later the paper so the labels can fit. 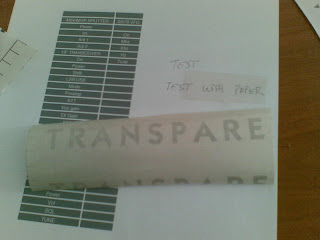 Latter will try also with some transparent glue and then some varnish over, that could end on a somewhat more professional look. Anyhow this is a cheap and fast way of giving some more good looks on your assenblies.
Publicada por Ricardo - CT2GQV em 10:59 AM 2 comments:

Decided to place a frontend preamplifier for my last VHF FM receiver (will post the receiver schematic in the future).

This time instead of using the commun BF981/961 typical amplifier I went to the BFR91 transistor. The BFR91 should be a little more noisier but hell, this is not for tropo or moon bounce, it's just for the local repeater... I didn't checked values but I am sure that for this components values it should be working in class A or near it....

The idea and main schematic is from "PA0NHC" (site is down at the moment so will not place here link), with the usual changes/"extra" component removal (some filtering on the power line): 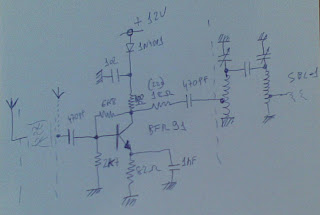 The 1N4001 if from the main receiver power supply...see the post bellow on the 78XX regulator for a clear understanding on why it's placed there...

The finished product (the preamp is on the top left side). 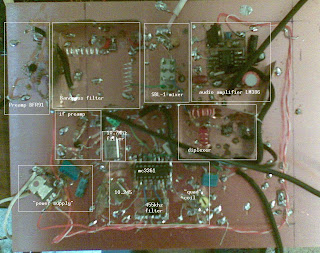 Well it did improve the reception but will have to make some more tests to see how well it goes. At this time I placed no input filter, just using the output filter before the SBL-1.
Publicada por Ricardo - CT2GQV em 4:36 PM No comments: