Here it is the major post for February...with some delay. Remember I'm trying to do at least 1 major project/post a month this year. 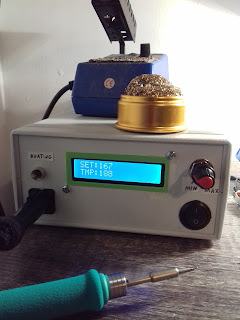 I've been building this for a while, here reading the thermocouple on the JBC tip and here painting the front panel. It took longer also since the LCD display ordered arrive dead (took the one from my long wave receiver) and had some or mistakes causing short-circuits and a blown MAX6675 module.

Before you go an replicate have a look on the advantage and disadvantage of this system :

* Good:
- Super fast from power on to melt solder compared to a "traditional" iron, this one takes about 5s excluding the boot process.
- Temperature control... if you really need, I build a lot of electronics without needing it.
- Very light tip
- Short distance from hand to tip.
- Multiple types of tips to chose from.
- JBC tip's from previous experience (standard iron) have a reasonable duration, this one... time will tell.
- Controller probably will work, with minor changes, for other temperature controlled iron's.

* Bad
- The system from JBC costs in excess of 400 Eur, it's hard to justify just for the hobby that amount. A good soldering Iron will cost 10x less and does the same job. This system costs half of it but still expensive.
- Proprietary hardware on the tips and with the price of just two tips you already buy a perfectly fine soldering iron, not even considering the tip holder.
- Tips will most likely have a shorter live due to low size causing thermal fatigue shortly.
- It overshoots easily with this type of control, anyhow if you consider the set temperature as the minimum then take that as a feature. 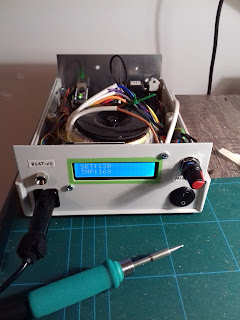 And during software troubleshooting: 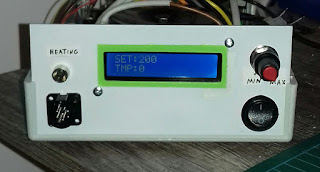 The schematic was based on this from "Great Scott": 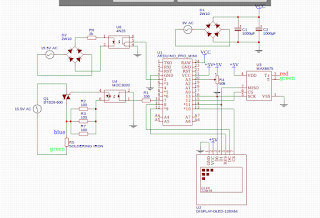 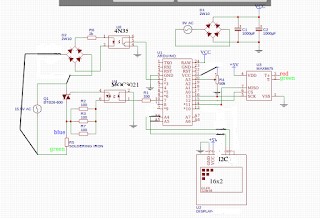 I used a 220/12+12 transformer, tip is powered by 24V AC (showing 15 on schematic).
Used also another display type (I2C), another Triac (MOC3021) and another opto-isolator (4N35).
Also for the supply I used the same transformer for the Iron and Zero crossing detector (4N35). The Arduino used a separate transformer with two regulators, one for the Arduino (7808 to vIn/vcc) itself and another for the MAX6675 and LCD display (7805 +5v) since the regulator for the Arduino was causing reset's if the MAX6675 was powered from Arduino 5v output.

Here's how fast is from power on to melting solder:
...around 5s since power is applied to the tip. I think the other Iron I have takes more than 2 minutes.

I ordered the T245-C with the foam handle and got a T245-A with plastic and foam on top. that is a good thing and that was exactly what I expected when ordering, look's JBC is adding an extra layer of isolation: 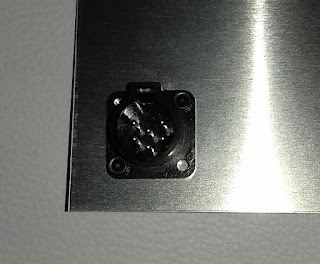 I only fixed with two bolts since I'm not very good at aligning holes and only have the hand drill. 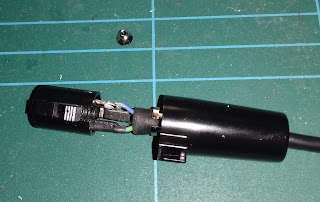 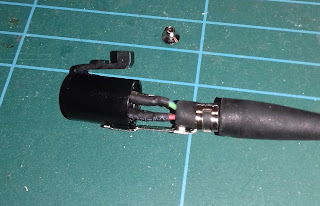 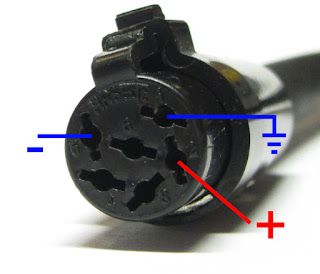 The total cost of the project was around 215.00 Eur (full station "mimic" of the JBC one: JBC CD-2BE) including the estimated price of a normal iron stand (18 Eur). Still half of the vendor price if I had shopping around. 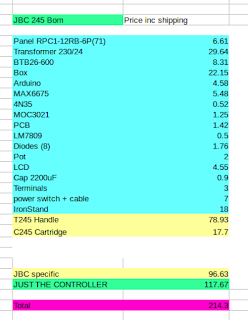 Will try in the future to test this controller with other similar function Irons.

The code will not be listed for the moment, it is a modified version of Scott's code with a different LCD (I2C).
The display function call in Scott's code had to me moved out of the zero crossing function since it would break I2C communication due to fast rate of interrupts. That caused me some delay until I could understand what was the situation of the display freezing. I placed the display call on the main loop updating every 0.2s.

Another problem I had was since I was doing the build according to my needs I tried to avoid separate power transformers for the iron and modules so caused a short after connecting the "-" of a bridge output to the actual tap of the AC on the transformer. This broke one rectifier bridge and also caused two diodes to fail in short circuit which then on the troubleshooting caused me a problem with a secondary short-circuit. That's what happen when you don't put on paper the changes made. The schematic on this page has that corrected.

// variables
float temperature;
int pottemperature;
int counter;
int readbutton; // to keep the value read on the sleep pin
int sleepmode=0; // we are not in sleep mode
int allowpower=1; // we are in power mode 1 initaly, there's no tip change

void loop() {
readbutton = analogRead(SLEEP_PIN); // iron on holder so lets set low power
if (readbutton <=10) { // that is the pin goes low because the ground of iron shorts pin to ground.
// sleep mode
sleepmode=1;
if(allowpower==0)allowpower=1; // we touched sleep mode after power is disable means we change tip else allowpower is allways 1.
} else {
sleepmode=0; // we are not in sleep mode
}

Nothing major here, just some instruction on how the best way to solder this plugs in case anyone looking for the info. 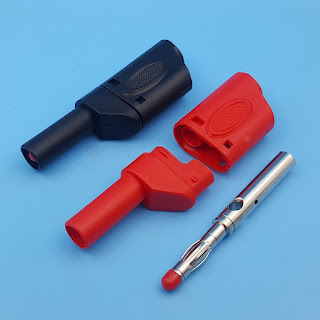 I bough some for the power supply and multimeter and questioned myself if there was a data-sheet for the plugs. There is, link for the "data-sheet" at the end.

They are a little of pain to solder with lower wattage soldering iron due to big surface area.

For my multimeter I had to cut a little to fully enter the terminals. 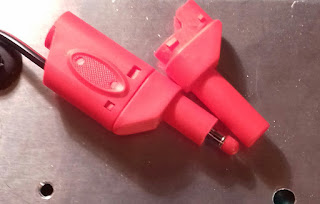 The main advantage for this ones is that they are stackable, the disadvantage is that have to be soldered, in some sense it can be advantage (better contact).

..easy!In my case I preferred to solder to the metal body without going trough the hole. 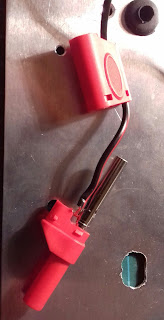