78XX and 79XX series voltage regulators are one of the most used components in small electronics equipment....the are, like the Titanic, and acording to the datasheet "...essentially indestructible..." except in the case of reverese polarity in the input or an Iceberg in the path for the Titanic case...
I think I found this for the first time this week, normaly I don't place polarity protection in my circuits because "I know what I am doing" but decided to test the "indestructible" assumption this week, I was in the shack for a small amount of time yesterday and connected the vhf receiver for a quick test, I saw that I was connecting power the wrong way but decided to see what appens.... well... at least one of the 78XX (LM7805) went dead, I just hope the MC3361, powered by it, survived. The 7809 connecting the LM386, audio amp, now has an output of 3v... go figure... will make some more tests when time allows.
Meanwhile, remember, look always at the datasheets and don't try anything that's not there!

By the way, it's easy to an rf signal bypass the 78XX series regulators so it's advisable to place some decoupling capacitors at the input and output. If that's not enough, change power "signal" routing and place some rf chokes in series with the power line.
Publicada por Ricardo - CT2GQV em 12:04 AM 5 comments:

While I don't have spare time to finish the vhf receiver decided to upgrade the shack computer. Normaly it's used for checking datasheets and verify some schematics but also used for some sporadic aprs and some psk31 decoding. The present machine is a PIII computer running at 500Mhz but I had been given a broken computer (according to the owner) so decided to check what was the problem, after all it was some broken RAM module. Now I have a fantastic PIII at 1000Mhz, that's double power from the previous one! Hey, I am happy, worked for a long time with 386 class processors and when 486 make their appearance those were supercomputers... since I use Linux that makes good use of all the hardware I am most than happy with the performance! Here's a photo of some installed apps! 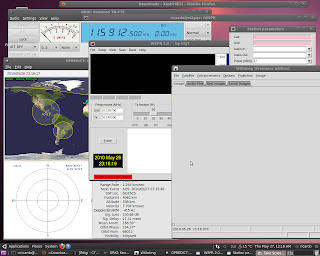 this time decided to try Ubuntu Linux distro instead of the usual Fedora or Slackware. There were some hamradio distros avaiable but I like something more generic and then tune my own way. Incidently I found an old TV/FM PCI receiver card that will use for watching tv in the shack (while analog system lasts).

The computer came without a sound card, so will have to look in the junk yard for a suitable one. For shure not one like the one in G4ILO blog at http://blog.g4ilo.com/2010/05/baffled.html I have an ISA soundblaster card but this state of the art computer only have PCI slots! rat's!

Meanwhile bough some more PCB board to make a companion transmitter for the VHF receiver.... when time permits!
Publicada por Ricardo - CT2GQV em 11:00 PM No comments:

Post's here had slowed down a litle bit, fact is; I have a temporary lack of time and summer is comming in to sunny Portugal... 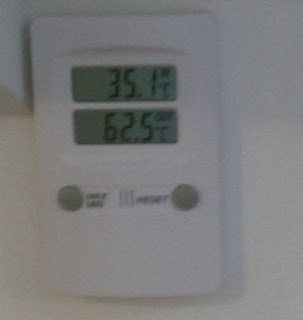 That's Celsius degrees, in and outside shack (bellow tiles)
Has you imagine is not easy to to soldering's in this conditions and I have no air cond in the shack.

Will try, when temperature drops a litle bit, to step on the VHF receiver soon, there are some issues with sensivity and some oscillations feedback bettwen Si570 kit box and power supply line.
Publicada por Ricardo - CT2GQV em 7:31 PM No comments: 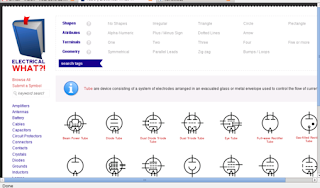 Meanwhile I am struggling with the MC3361 oscillation, it's like this: once powered on there's normal noise then after some 5 seconds starts increasing the noise and a slow oscillation them some more 7 or 8 seconds this oscillation decreases and resumes normal operation....could it be some sort of dampening on the quad coil circuit? Is it decoupling? If if was decoupling it didn't resumed normal working beahvior....any ideas?
Publicada por Ricardo - CT2GQV em 12:17 AM No comments:

There is a problem in the server I have hosted the 2 apps in this blog (led and mW2dbm) so for now they are unaccessible....
If it persists until tomorrow I will have a look and se if I can help the hosting company, but for now looks one of this problems:

-Someone updated the web hosting software and made some config wrong
-The disk got broken
-The host got compromised and someone cleaned some config files, http is working

Without shell access for now I am just speculating...

Anyhow, I hope they sort things out because the other option is my loss of a lot of work!

p.s. I gave a quick look accessing the server another possible way and at least the files are not lost so it is probably just a config issue. I am more relaxed!
Publicada por Ricardo - CT2GQV em 10:26 PM No comments:

I always get back to VHF receivers although I rarely work the 2m band.
This one is not finished yet, there's the squelch missing and I have a very strange oscillation/feedback when the circuit is powered on, then it disappears...strange stuff. It's something related to the MC3361, it does that even without input signal.
I might add later an antenna preamp but for now I am quite happy with the performance. From top left to bottom right there's the antenna input filter, the SBL-1 mixer, the audio amp, an diplexer in the middle then the IF preamp and the filter (a simple 10.7 crystal), bellow is the MC3361.
ASAP will post the schematic
Publicada por Ricardo - CT2GQV em 5:05 PM 1 comment:

Limiter resistor value = (V power supply - V drop at the LED) / I working LED
But it's easier if you have an on-line app to do the math.... so I coded this one during lunch time.
Have fun, it's on the right side of the blog.
Soon new "hardware", and not software, will be posted on the blog.
Publicada por Ricardo - CT2GQV em 3:25 PM No comments:

I am sure conversion from mW to dBm is not an everyday occurrence but never the less I wanted to try this blogspot feature of creating your own mini application. So to remove some rust from my programing skills made a simple program in php to help convert those mW to dBm. Named "mW2dBm" is the first app on the right panel of the blog. Formula for computing dBm is: 10 times Log base 10 of mW that is 10 * log10(mW).

Here's the simple code, case you want to put on a webserver. You will need php and to name the file "mw2dbm.php".
It's an image cause I had no time to check how to put code in a blogspot post.
License is GPL, you can do whatever you want. 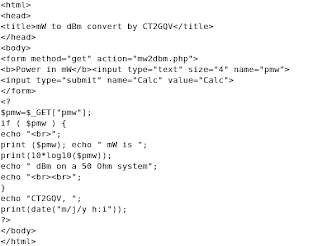