It's possible that this could work for other Yaesu equipments using edge adapters but for the Yaesu FT-107 / Sommerkamp FT-307 on the 22 pin connector it works.

I was looking around for the possibility of creating a riser/extension card for troubleshooting the memory unit (DMS unit) on the FT-307, acquired recently, (it's not working 100%) and all seemed too much expensive for one time use (so I hope)


Looking around on what would be the references for the edge adapters used in the Yaesu and not finding it, decide to take my change on less than 2 Eur (1.71 inc shipping) and got one adapter from the far east, it was advertised as 805 series 3.96mm pitch card edge connector for PCI, AGP connections, this image: 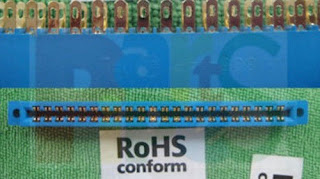 Without having the exact details but after measuring the DMS unit pin spacing I decided it should be ok. Here's what I got in front of the DMS slot.

It fits, a little sluggish, that is; a tight fit, but workable, I had to lever a bit to remove after initial testing. Probably with more use will loosen up.

I'm not going to make the riser card instead will use a stand alone simulator card as the radio where I can fit the DMS unit, this card basically will output to the DMS the external VFO output, Will also mimic the memory selector and the memory save function. It's the most workable solution since I decided to keep the FT-307 in Portugal and only bring the DMS unit for fixing. 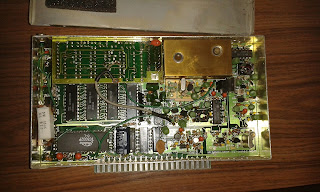 Yaesu slot for the DMS: 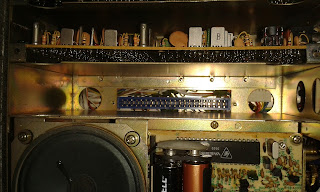 If I fail to fix the DMS unit I'm planing on build my own with an Arduino and a AD9850 or similar, for now it's just a backup plan.