Murphy's law: If anything can go wrong, it will!

I was suppose to go for the weekend at my parents and operate there for this "contest", unfortunately daughter got ill (is alright now) on Friday and a car journey wouldn't do any better, so and since I left the FT-102 and TS-50 at my parents I was reduced to 5 watts on the FT-817 at the main shack. 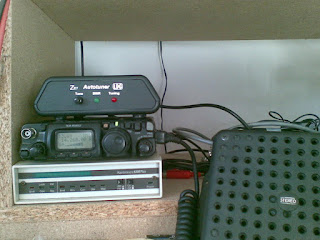 In "normal" conditions 5 watts are more than enough for the 900Km that separate the Azores from my QTH.... but 5 watts is no power to break the huge pileup formed for this event, look's like everybody wanted to go for a visit to the Azores island...
Also because of the conditionants I could only operate Saturday from 14H00 to 19H00.

When I got to the shack I discovered that one of the legs of the dipole was broken, looked like the rope supporting it had broke, had to go to the roof and fix, unfortunately was the dipole wire that broke, a quick fix and on to the shack again. After some call's the low power and the dipole orientation weren't doing miracles, in fact weren't doing anything. I switched to a vertical I build some time ago, basically some aluminum tubes and a little of wire as ground counterpoint, problem is this vertical is not permanently outside but was used temporarily outside the shack window. 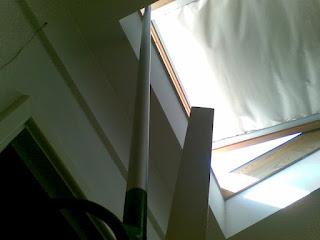 ...don't laugh, this antenna in this conditions allowed me to make already more than 100 different DX entities.


So after 5 hours shouting my call, here's the outcome: 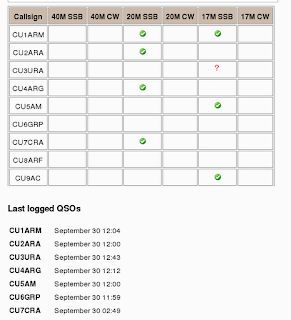 ....I have now a lot more respect for the people that just operate QRP... and I have to build an speech processor for the 817.

There was a qso that didn't entered the log or the operator at CU3URA didn't wrote correctly my call, no problem, I'm sure it's not easy to be on the other side of the pileup and at least I confirmed more than the minimum 5 stations.

It was fun even if I didn't managed to work all stations, anyhow I spotted them all, if I was running 100W the story was other.....

My initial idea on the problem: 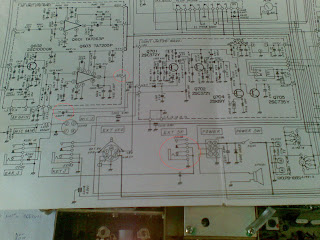 ....but before starting cleaning the plug switch I had the idea of checking the power cable because audio is also routed there (right of the plug in the schematic).

Red as it was connected, green as it should be connected...
(image is from FT-7B but is similar to FT-7)

Rewired the plug and guess what.... nice sound coming from the internal unit!

So came to the conclusion, since the radio came with the companion FL-110 amplifier but only one cable, that the power cable initially was for the FL-110. Since both equipments were to be used together I wonder why the folks at Yaesu never tough that this issue could be problematic...

Now there's only one problem with the FT-7, no signal reception on 40m band so the problem is for sure on the band switch or the band oscillator (or a band filter) because rest of the circuit is common to all the other bands that are working good. I don't feel like to check the band switch now so will leave that for another day...

I had this project unfinished for a long time although I had already used the noise generator part from the circuit (left part) but not the noise bridge (from C5 to the right).

The original were I based mine was from here ...if I remember...

Honestly I changed the schematic a little bit, didn't placed the calibration caps... will put latter on, just wanted to check resistive impedance for now.
Tested against my wire dipole just to discover that it's resonant near 19.4 Mhz, think this time I cut the wire a little to short....

Crosschecking the same dipole with the antenna analyzer: 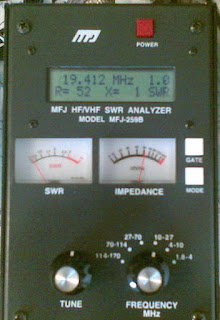 Spot on! I can discharge the MFJ :)


I tested the circuit with another antenna, in this case a loop for 500Khz but didn't got a null so must check again directly to the loop and not to the coupling part, there's also a chance I passed the resonance frequency without noticing it.

If you want a simple and cheap way to check antennas this is it....you still need a receiver tough...

In 2003 I booked a flight to go to Friedrichshafen ham radio exhibition in Germany...the flight was scheduled to 7:00 AM. The booked day I fell asleep and arrived at the airport 10 minutes before flight just to discover it had been canceled...I got really "#$!"#$ed... lost all the will to go and asked if I could change the ticket to a flight to the Azores (Açores in Portuguese) islands, I had the tent with me and never had been in the Azores so the radio exhibition could wait for another year, unfortunately they could not change destination so I went in the next flight to Germany, Switzerland actually and then train and boat to Germany.
In 2004 I worked for an ISP and it was necessary to test and connect a router at the American school in the USA Lages airbase, I volunteered to do the job, that way I would have the change to go there, unfortunately it was possible to do everything remotely...so I lost again a change to visit the Islands.
Why do I want to go there, just because that's one of the two parts the country I've never been, being the other one Madeira island.

A team of ham radio operators will be the next weekend (28-30/September 2012) activating all the 9 islands.
Making 5 or more QSO's with them will have a corresponding number of tickets placed into a lottery for a free trip to the Azores!
So I will fire up my FT-817 if band conditions permit, else the FT-102 :), and try my luck. Regardless of the lottery I don't have QSO's with all the 9 islands, so there's another chance for doing that in a single weekend.

In a recent exchange I got 2 Kantronics TNC's one "All mode" and a "KAM Plus", the "Plus" when I did the exchange I suspected something wrong with him (there were signs of a repair attempt), anyhow my idea on the exchange was just for one Kantronics; I end up with 2 and a bunch of other stuff... the antenna relay of the previous post, 3 channelized handies and some boards with components.


The Kantronics "Allmode" was working as expected but not the "KAM Plus". After looking for some info I found the schematic. Started debugging... first problem was a capacitor on the 8v part of the circuit, 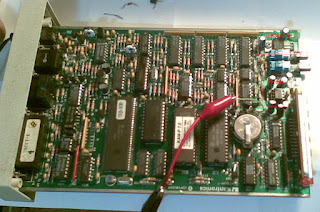 ...but I soon found out that was not the only issue. Another problem was in the -5v path. I ordered a new LT1054 IC, replaced it... but nothing changed, more caps changed and nothing, I then decided to try out the LT1054 part outboard duplicating the circuit... 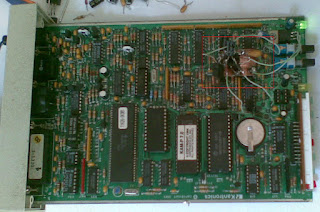 .... now that's when things got interesting , the LT1054 not allways started, I found the problem! Some day's later after much testing I replaced the 8V part by 9V with a simple 7809 and placed an outboard for the LT1054.

All voltages are now ok.... time to test, first try:

Bingo! I have ignition! I've read about this in the manual... after some tries he asked for the callsign! Great!

After the prompt, let's try some RTTY 50 reception...

Cool....it works, didn't tried the VHF port, but no reason for not being working...

My mods (some stuff is outboard):

There are some differences in the schematic to the board I have in terms of components notation... guess there are different revisions.

At some point, honestly, I was almost to give up and reuse the components, I'm glad I didn't!

Fellow ham IK5PWC did repair an "Kantronics all mode" model with a different PSU type.

Now I have to box it up again and give him some more years of service, I hope.

Got this in an exchange (actually the exchange was for other equipment's, this was more an ofter I gladly accepted): 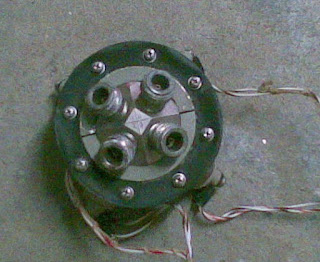 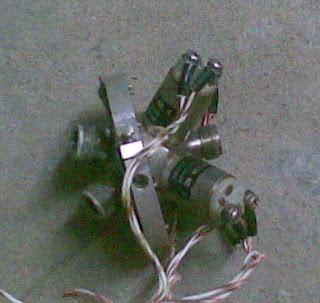 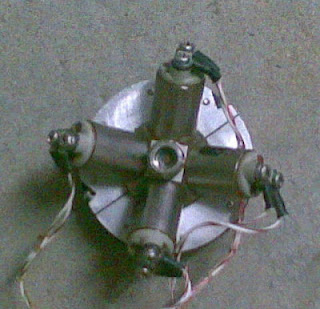 Connectors are "N" type.
Please don't tell me it's an rf relay/coaxial switch.... I'm also sure it's not a resistor or a capacitor :)
What I would like to know before testing is the voltage, normally if it's American made it's 28V others more common are 12V. Anyhow will test latter on.

There's only markings for the polarity in each of the coils but no model or serial number, also there's a sticker with "energize to close" in each coil.
Manufacturer seems to be "PTI Lab" but since it's lightly marked and not with a sticker like the markings on the coils, "PTI Lab" could be the place that bought this item originally.

The piece without the round bracket support: 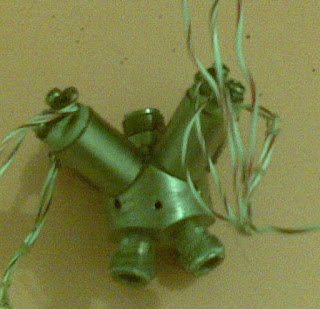 Quality seems top notch and I'm sure it will extend to the Ghz range due to small size and build type. If it's working will be placed one of this days in the roof....