No big magic here, copy the schematic from the net, make an nice _expensive_ box and "voila": an programing cable for my TH-F7E.
Components were from the junk box and some from my local suplier, I think total cost even from an expensive supplier would be around 10 Eur/USD top most. Cost from Ken-timber(wood) is around 62 Eur, software is free of charge which is nice! 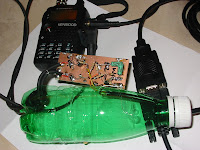 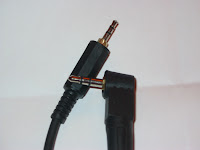 By the way the box is from "Vimeiro" spkarkling water. I have an antenna pre-amplifier inside another water botle in the roof :)
The plugs have to be grinded (trimed) to fit ( full entering) in the radio.

The board was from an power supply experimenting and as always a mix of "Manhattan style" and "Dead bug" which one is faster...

The interface schematic comes from: http://www.geocities.com/azkoza/projects/pg4p/g71cable.html

Here it is the schematic from the above site:

Incidently today as of writing I found another schematic that I didn't tested and dependes on an max232 to make level convertions. Is here: http://www.g1ivg.com/ken_thf7e.htm 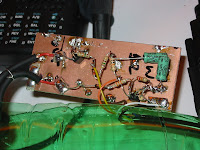 Only had an small problem but was on the software side, winblows creates "com port 10" and I was expecting 3 so no communication at the begining.

About the radio: so far so good, easy to learn, a little deaf with the stock antenna ( read: dummy load), no small step on 446Mhz to listen exactly on PMR frequency.

In Linux I still haven't tested the interface because the USB to serial cable is not fully operational, I will upgrade soon to Fedora Core 10 and test then, in FC4 and 6 it didn't worked, I have reception but no transmit. Chipset for the cable is PL2303.
Publicada por Ricardo - CT2GQV em 11:34 PM No comments:

Busy busy busy.... but still some time to solder...

Pretty much I've been doing some small things:

- FM receiver (done, working in box but no power is connected to :)
From: An kit laying around in the shack :)

- Loop antenna for MW/SW (done, works, could be improved)
From: Mixed design from web and some experimenting (read: from parts laying around an UTP cable)

- New box for the PSK interface (done, lost 2 screws from the 4 that close the box)
From: Old telecom box

Will post some photos and articles as soon as I find the cable to transfer the images from the camera :)

My oscilloscope broke, "caboom", crashed, exploded... I'm trying to fix the bloody thing...
Well it's an advantage, now I have to test things with other methods and learn something new :)

My HF antenna ( some people disagree on what that object is ) broke; well it was make to broke at some point in time, it's just an piece of wire in dipole shape more or less cut'd to the 17m band, hanging on shoe strings between to chemnis pointed est/west... But permit's me to make some nice qso's with only 100w geting over some of those killowat pileup busters that make more electromagnetic noise than an microwave oven! ( you know who I am talking about :)
Publicada por Ricardo - CT2GQV em 11:43 PM No comments: