..Well, the lights done in last post were a success... not like I would expect but in the sense that I made a child happy.
When I offered the lights the first question was: What's this?.... I immediately tough I made a complete failure, but one second latter I managed to get a quick answer: It's a bicycle speed increaser...and something for other's to see you!... on to put the device on the "veichule" and give some instructions :)
Next day in the morning there goes the kid with the bike on to the city park, after the real "test" he told me it was a complete success! The speed will continue to increase...the more he practices!

Some time ago I offered my nephew an "shooting star catcher".... one magnet removed from an hard drive.... as you know most meteorites are made of iron but what's get's down to earth it's just small sand grains. A magnet will easily pic them up from the "normal" beach sand...not as flashy as a bicycle speed increase r but it's nice to develop kids imagination.
Publicada por Ricardo - CT2GQV em 11:35 PM No comments:

Honestly, I try to be the most politically correct in this blog although only at the radio I have the legal obligation for that :)
Said that, and since I don't know the religious or annual (not everybody is in 2010) calendar that each blog reader uses, accept my season's greetings when ever you want!

Here's something to be used as a gift:

Not finished yet (only 3 out of 6 LED's connected and in prototype board) but will be similar to the famous "Knight rider" car lights... what a better use for an 555 and 4017 with at least 15 years old!
This will go to my nephew bicycle. His Christmas present.

Somethings in the "oven"

Nothing special just some updates on an old project and a new transverter. 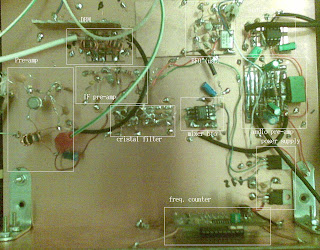 Still missing is the bandpass filter and the "LSB" oscilator.

A new (for me) 6-10m transverter... right now only the oscillator and the receive converter module without all the coils, but already receiving... the oscilator from the MFJ antenna analyser at 50cm distance :) 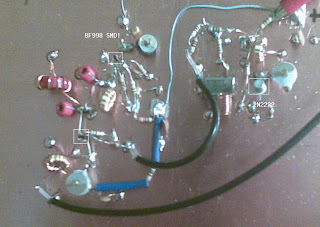 The Yaesu FT-102 has a lot of outputs/inputs in the back pannel and a lot of controls in the front which is always nice....
Two of the most interesting outputs in the back are the 8.2Mhz and 455Khz IF out marked as 2º and First respectively (strange!?). The 455Khz one is filtered so you don't get many signals outside the pass band but the 8.2Mhz one is just before the 8.2 cristal filter in the FT-102 giving you an overlook on signals after the first mixer. That could be interesting to place an panoramic adapter or a second receiver. I decided to see (level wise) what signals I get there. I you connect directly an HF receiver tuned at 8.215Mhz you will get the same signal that the radio outputs by the speaker (at a much lower level though) also if you go out 10Khz from 8.215Mhz you are listening with 10Khz offset, logic in all similar concept receivers! You get the point, else you were not reading this. The limit is only the passband on the input filters, but they are built to give the entire band.

On to the schematic... 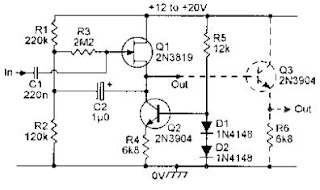 Those 2 blocks allows to increase the signal level to the point that on a normal HF receiver (TS-50 tested) the signal of the signal meter is more or less the same that the FT-102 is displaying. There are still things to improve like puting a 8.2Mhz "band" wide filter between the 2 blocks or a tuned rf transformer from the radio to the buffer stage.

My idea is to put an panoramic receiver after this buffer/amplifier or connect to a scope for in band signal monitoring.
During tests a single downconverter with an NE602 was conected directly at the amplifier stage output but the NE602 is noisy as hell (or was not well coupled) so will probably replace for something else in the future. Anyhow this was just a proof of concept.

WB8WGA APRS TNC was a project waiting for the the 16F88 pic programing. Now that it's done I decided to test it using the TH-F7 audio output.
Some frames got decoded but not even 10 %, so it looks like that it has a worst performance than my previous APRS decoder with the 16F628 PIC (http://speakyssb.blogspot.com/search/label/PIC%20based%20packet%20decoder). From what i've seen the audio level must be set very well or else it has some difficulty decoding the frames (same on the 16F628 project).
Other ham's report better success than mine on their's project page, anyhow an absolute test will only be made when the VHF transceiver module is programed with the local APRS frequency.

Here's the external link to the schematic I used. 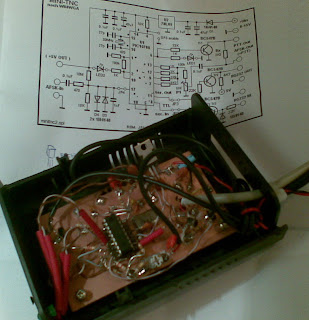 Remember TXD and RXD are reversed if you'r not using the GPS input but an RS232 for computer access to the terminal.

My configuration for the quick receiving test was just:

mycal CT2GQV (that's my call...)
mon all (monitor all the frames)
perm (to save configuration)

* use "help" at the prompt for full command list.