Here's another question, this time I know the answer... 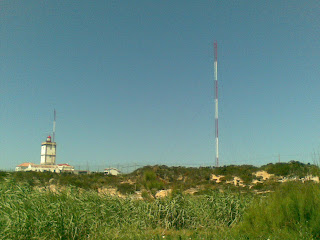 The location is "Cabo Carvoeiro" (Cape Carvoeiro) located near the city of Peniche and of course the building is a lighthouse so that doesn't count as an answer, the antenna is a T type being the top part made of 2 parallel cables (lenght is 92m height is 27m), so could be probably a simple T with more bandwidth or sort of a terminated loop. There's also the possibility of beeing 2 antenas in redundance! Sory but I don't have more exact technical details.
The question is: what's the purpose of the antenna?

Anyhow the late antenna is almost as good as the HF one I putted in my alternative shack.... made in 20 minutes... 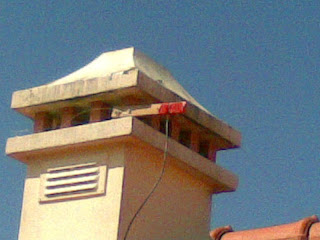 can't get more simple than this...2 pieces of wire forming a dipole. Not perfect but much better than using the VHF antenna (it was for reception only!)...

Meanwhile I have been busy with other stuf so you have to wait for some more solderings... maybe next week.
Publicada por Ricardo - CT2GQV em 12:28 PM 2 comments: 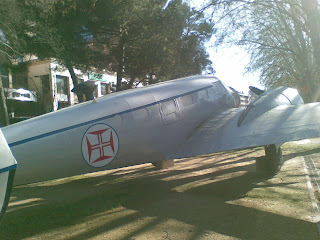 I haven't had much time for soldering so here's just a litle radio related post to keep the blog updated.

One of this days I went to the city park with my daughter for some fun and in this public space there's a nice little plane, it's there for the time I remember, for some time neglected now it's on a more proper shape. Beeing an ham, couldn't help from spoting some radio related parts.... but there's one I don't know what is it maybe someone can tell me: 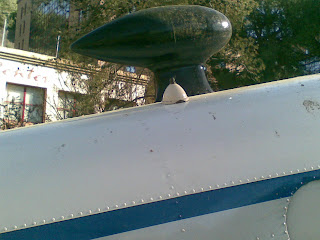 The white cap look's like an insulator for the HF antenna at least it's very similar to the ones used in boats but the bullet shaped big device on top I could only guess it's some sort of radar or direction finding antenna inside, honestly I don't know, maybe someone knows....

I spend some time yesterday thinking in today's build up.

Having read a post with schematics of compact fluorescent lamps I thought what could be done with those components.
Searching in components specs I noted that the MJE13001 transistors have an TF of 1000000000mHz so that's qualify them to be used in an HF amplifier, also their absolute voltage rating is in the order of 400V (collector to emitter).
I didn't planed to use the 400V but instead a more conservative 110V.
I also found that the toroid present in this lamps (first schematic on the site referred) it's similar to those used in broadband transformers (type 43 material) so will be used also.

Remember that voltages present could be lethal so take absolut care building this stuff. 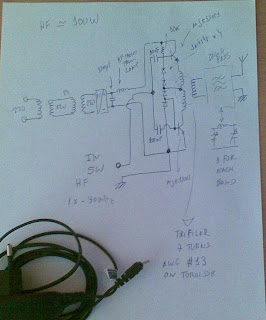 You should absolutly place a bandpass filter since transistors are working near saturation ence increasing harmonics.
Also place a a cover in the assembly before firing the power because they will get a little, just a little bit hot.... also usefull to remove hardware interferences :)
you can reuse the 1 Ohm resistor from the lamp and place them in the emitter of each transistor, reducing a little bit the output power to around 50W according to my readings.

So here you have from 5W to 100W with a light bulb and 2 power transformers!


Photos of the prototype will be placed tomorrow since I run out of cell phone battery. that allways hapens to me in April first.
Publicada por Ricardo - CT2GQV em 11:02 AM 2 comments: