50 Mhz had been one of those bands that I never tried, till now.

Instead of making a receive converter I went the lazy route and bought a transverter in completed kit form.

The idea for now is just to add it to a Bitx converted to 28Mhz and be used only as receiver.

This week I wired the transverter to check if working correctly, connected to the FT-707 and got some faint signals (I'm using just a bit of wire as antenna).
Today the band is more open and got one big signal from EI9FVB, after checking the call and the locator, guess what, is in the same locator as me, no wonder. Previous test, during week, I managed to receive IS0BSR/P so reception part of the kit is working.

Here's some pictures for the future box while not everything is finished, will update when complete and if using the Bitx is a viable possibility for a 50Mhz receiver/transverter.

Transverter on top of Bitx board and the VFO on the right. I decided to buy a Bitx PCB instead o making on bare copper one since it will be faster to build. 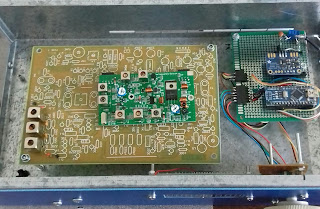 Transverter on final location inside the box, blue wire is the temporary antenna, the black one is the IF (28Mhz) output. 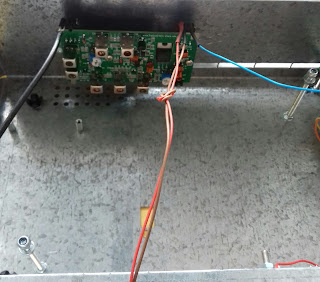 The 10m filter (on the right) for the Bitx input: (will also try without it and rely on the transverter filtering) 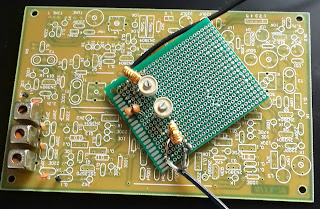 ..I also made testing with the "standard" Bitx coils ( soldered on the board) for 14m, 30m and 40m case the board be reconverted (that will probably be another post).
The 10m filter values were from here, and it's similar to many others.

...and the matching curve, no calibration on the "analyser" values, but seems to work I connected to the Yaesu input for in air 10m testing and got signals... like if that was a valid test :) 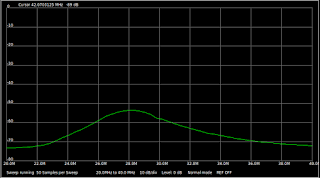 The box/front panel will be this one: still need to change VFO code

...it's a reuse of VFO for the Telrad board from previous posts.