Ok, this time the FT-707 is not the usual suspect.

I started testing transmission since reception looks stable now (more on it on latter posts).
First test showed the the mic ptt was not working, it was "wired to the FT-707" according to the vendor.... let's have a look: 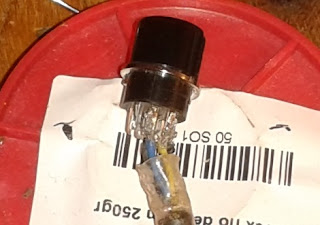 Wrong, it was not wired to the FT-707, all of the wires were badly soldered, with some loose strands and one of the nedeed pins (7) had not even a small mark showing signs of any soldering... oh well... 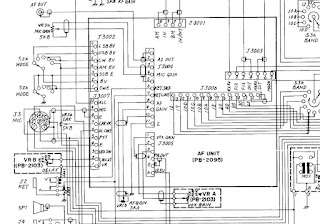 After rebuilding and some cleaning I notice that it was a litle hard releasing the PTT switch. Let's open the mic to see if it is the release spring worn out or some other issue. After testing I notice the black plastic from the PTT was rubbing a litle against the outer case so I filled inside a little bit.. 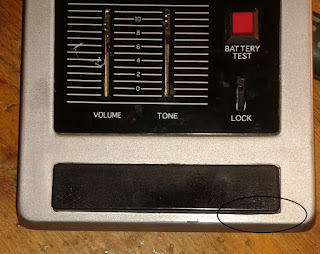 ..and now, much better, honestly the MIC in fact has a good internal/electronic design but the mechanical part that's another story. That's poor quality control or the plastics expanded over time which is also likely.


And after some small cosmetic cleaning here it his: 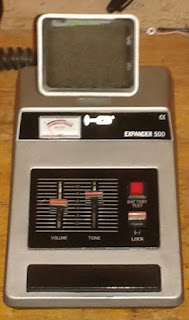 On to testing the radio again... less than 5w out... this is the first time I tough: it goes for parts... well it was ALC preventing more power, I didn't gave up, and after some tunning it's now "limited" to around 50 during this testing phase, I got easily the, promised by Yaesu, 100w during tests.
Still have to test again in SSB with the mic since I was using CW/AM and only the MIC PTT or MOX.
The other set (the blue color one) it's the same from what I've seen, also I suspect a cap or a transistor will explode shortly since there's some background noise on key down... will see!

On last post I noticed the decimal dot not working in one of the FT-707 units. 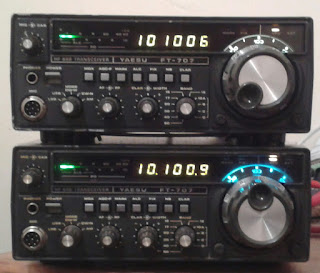 I was hoping for a simple cable broken and not the 7 seg display... it was the cable!

Here's the reason, cable broken on the endpoint, the "missing" one is colored grey coming from the counter unit. The X in the picture marks the spot for the missing "dot" cable:

Had to loosen the from panel a litlle to manage to solder the cable there since the space is short.

Here's for future reference, if deeper troubleshooting needed, the interconnection between the display counter unit and the 7 segments LED display in the front panel: 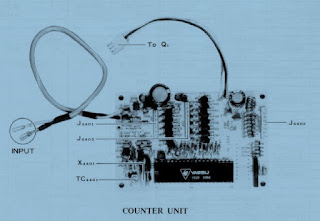 The output of the counter unit to the LED display 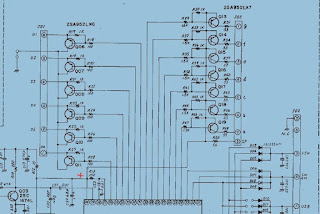 The LED unit in the from panel, wires are soldered directly from the PCB to the two plugs on the counter unit: 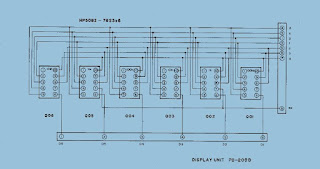 The pint out for the 7 seg LED display used in this radios, I think are similar to FT-107 and others. 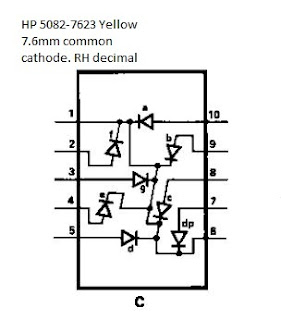 Another fix on one of the FT-707 duo. This unit didn't have the VFO dial ligh's working.

I could had bought those small grain of wheat original bulbs for replacement, instead decided to try LED light on the display, thinking in long term without further maintenance. Got two 3mm high brightness white LED's and placed a 680 Ohm resistor in series across both to limit the brilliance, before placement tested with 330 Ohm limiting resistor and tough it was to much bright. 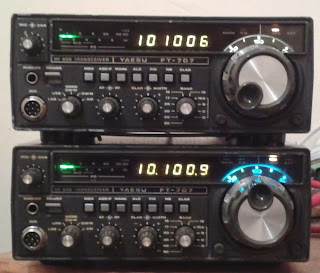 I guess the blue color is because the LED's are white and the rubber grommets blue, maybe with Yellow would stay close to original, anyhow I like it. 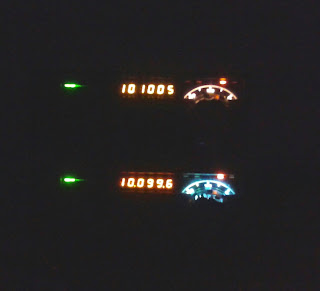 Now the fixing job, bellow picture, the board with the bulb and LED connections, I removed the frequency counter module (above the VFO box) to better access this board: 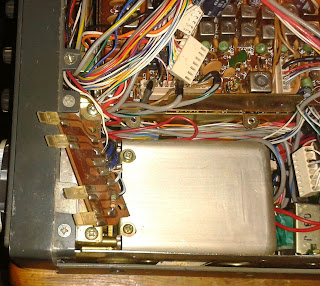 The rubber receptacles for the lamps with original bulbs still in place: 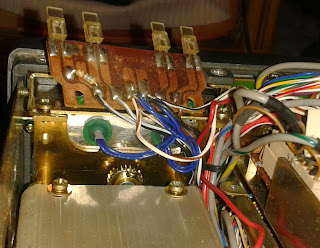 Removing them it's just a matter of gently pulling the blue cable. Inserting the LED's it's also easy.

It was a fast job, just need to pay a little attention to not break any of the cables that connect on the board. Fitting the square LED's on the openings of the from panel was also easy.

Don't know if you noticed and I just noticed yesterday, one of the units doesn't have the decimal points on the frequency display, I hope it's just a wire...or soon I will have a degree on FT-707 fixing!

Here's a fix for those who own a FT-707 converted to CB and need to revert back but don't have the original crystals (should work also on the FT-902 and others sharing similar design).

I just request the price, from an Yaesu distributor, for the original 10m band crystals (A,B,C and D). Price quoted was 18 Eur each. Well that's not in my budged since I will need 8 crystals (4 on each set) and that would give the wonderfull sum of  144 Eur, I almost can buy a radio for that money! Guess will have to wait for someone to sell a complete board from a scavenged unit, I've seen premix oscillator boards selling, on online auction sites, for half the price and with all the crystals there.

Anyhow I'm not to be stooped by this, after some calculation I beted that an crystal around 14Mhz will do the overtone job....bought a 14.318 Mhz unit by a woping 0.28 Eur (that's 28 cents) and replaced the crystal, on the 10m D band place, just for testing since I don't have the oscillator coil on 10mB, and this was the result:

I works, spans reception from 28.436 to 29.004 Mhz with the oscillator at 42.972Mhz (14.324Mhz) ! Perfect! Adjusting the premix oscillator variable coil was needed since it was set to the previous CB frequency.

So, for the 10m B position, i'm sorted, now I need to find the other 10m band crystals,  I was looking before on old crystalized scanners crystals and also model control ones, so far no luck on the exact frequencies. There are some specialized sites selling the needed crystal's at around 10 Eur each, still think it's too much for a piece of rock...

If by any chance you know where to find the following crystal's (cheaply) just let me know, apreciate:

The red cross one is the 14.318Mhz one tested. These 14.318Mhz crystals are also found on computer motherboards if cheaper, than 0.28Eur, source is needed!

This one was easy, decided to check first the mode switch at the entrace point and then going from there, I was thinking it could be aging of the LSB crystal since on a previous test while troubleshooting the other issues on the radio fiddling with the LSB trimmer cap hadn't notice any audio change. 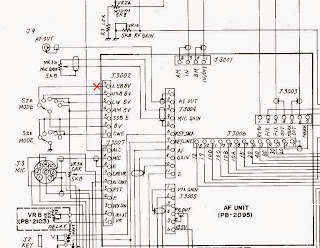 There was no need to look further, the problem was obvious, a broken connection providing the 8v for the LSB BFO oscilator (in fact to the crystal switching diode in the BFO oscillator) and that explains why changing the trimmer position had no effect on audio, it was not even oscillating: 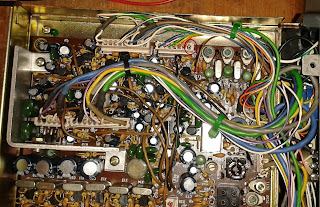 Now on to set number 1, the external ACC and the dial bulb to fix....

This was a tricky problem, since I had 30m and not 20m correctly and the 20m premix was having low power so I suspecting mostly from the switching of the 20m premix filter and someting on the LPF for the 30/20m band because if I disconnect the LPF switching cable it would work on 30.

After following the switching line schematics for the LPF filtering: 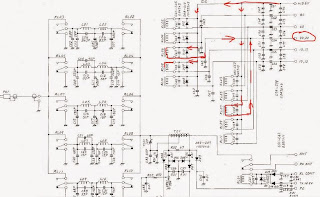 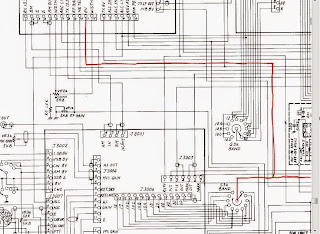 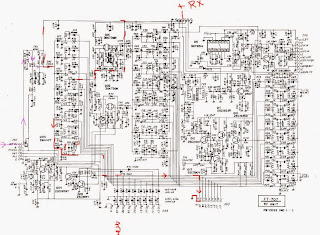 Eventually... I figure it out in the middle of this mess: 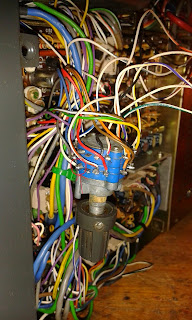 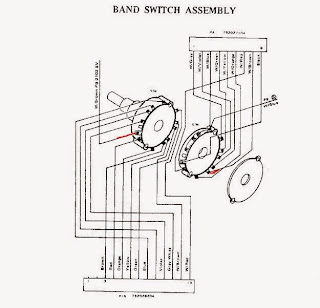 ....since the +8v was missing on the band selector also.

By the way, the text notation for "a" and "b" switch's assembly are reversed from the main schematic, tough the schematic is correct in terms of connections.

I would not have been impossible to figure the problem without the manuals, thank you Yaesu!

Now I have to figure it out what's wrong with LSB, I have some distortion and low audio, since the chain is basically the same as USB I suspect one of the two oscillators in line, the LSB and the "whith" one.

More fun in the future...

This is part one since it's not finished yet.

Last week I bought not one but two Yaesu FT-707, a full line and another one for spares but working...as stated, aligned by one of the best radio technicians around....

Here it is, part of the set: 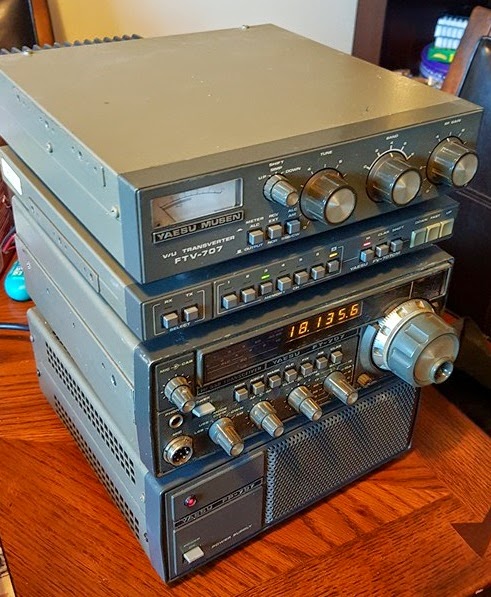 Missing in the picture the second radio and the antenna tuner.

Ok, so after power on here's the list of faults by set, reception only, since I didn't TX yet:

Obviously unit 1 will be, hopefully, quickly fixed so I started looking on unit 2:

* The problem with 20 and 30m band is the display showing of around 91 Mhz, a common issue on this radios, normally a bad contact on the selector but not on this one. 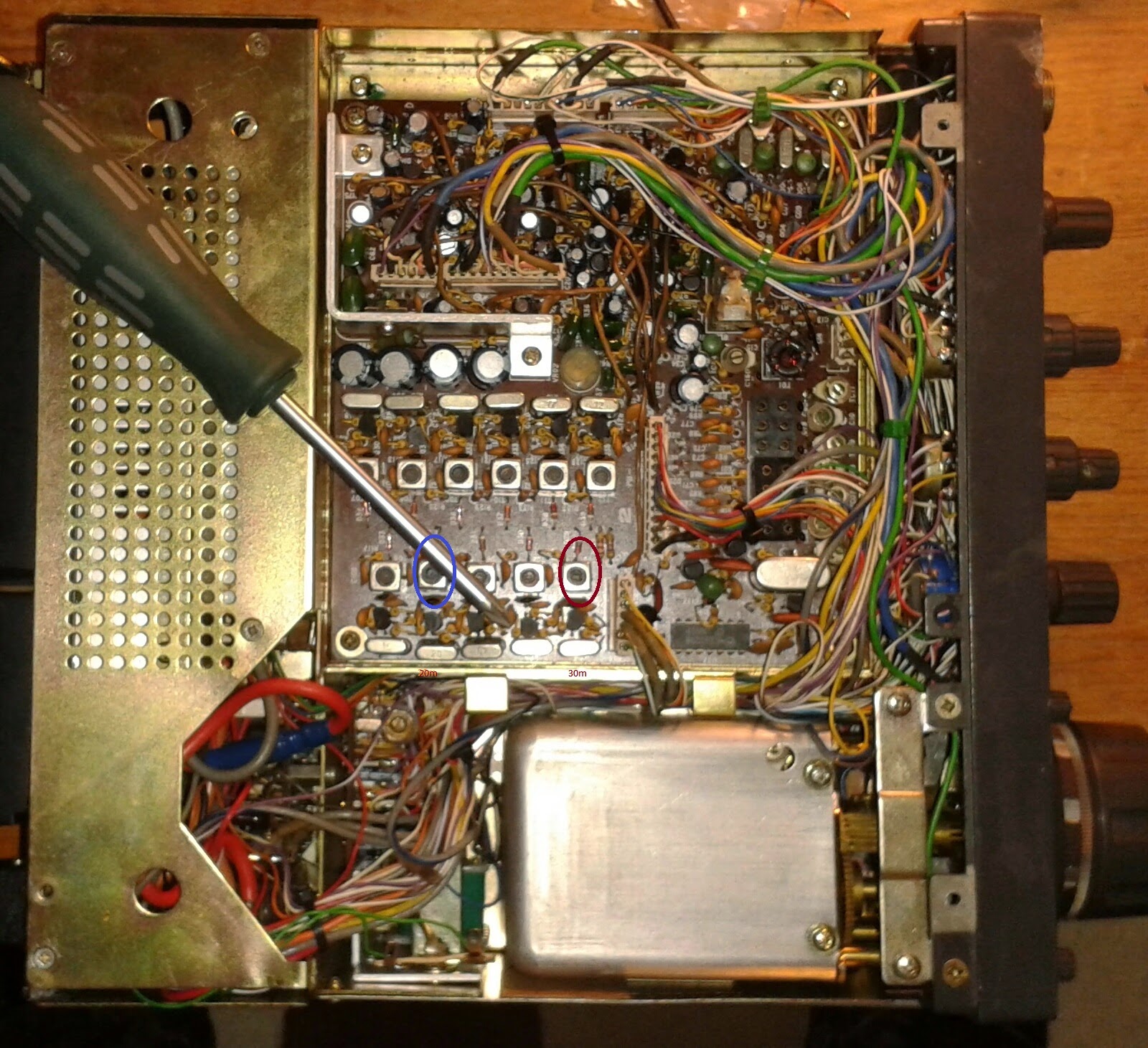 After connecting the scope and not getting the overtone frequency, only the fundamental... I started to suspect on fault components at the tank part, that was when I notice that the coils were not the original of the radio...
I removed the coils and placed a "work around" on the 20m one just ot check if I got the overtone: 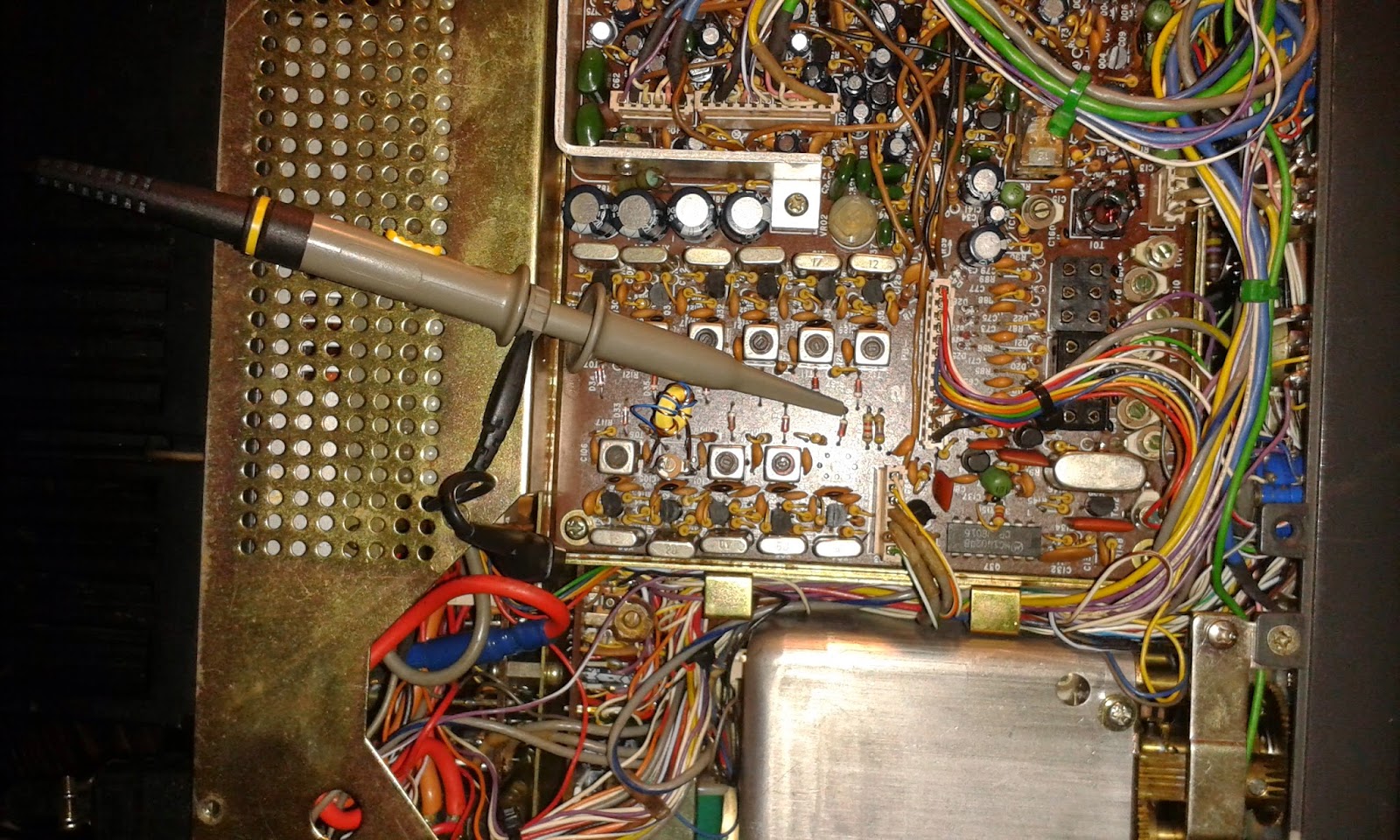 Basically 10 turn on an T37-6 (the yellow coil in the picture) will resonate on around 28Mhz with 100pf, see top black circle on the schematic bellow, 28.487 Mhz is the premix for the 20m band.  It did resonate with my workaround, good, the coil that I removed would never work.
I didn't tested the resonance, yet, of the removed coils but I suspect that they were placed by the very good technician that take care of the radio just because they were similar, one of then even had the parallel cap in place... oh well, any "butcher" can get a soldering iron!

This is the general idea of the workings of the premix: 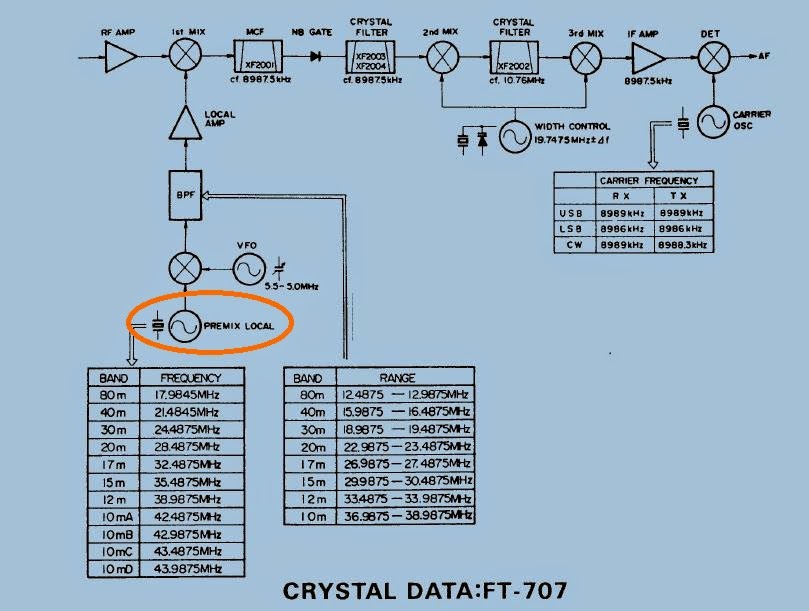 And here the two problematic oscillators: 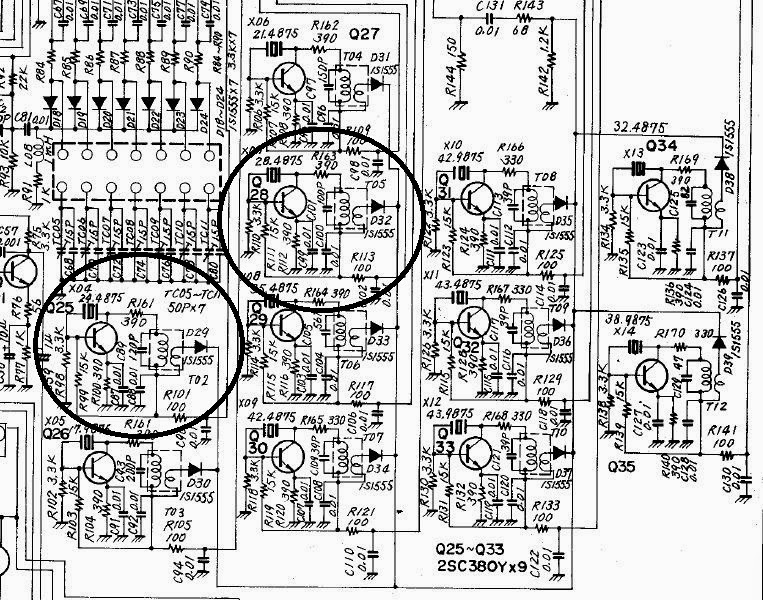 The coils are branded Mitsumi (628 or 608 not sure now) and from what I searched they are a bit of unobtainable... so what to do? Easy, get the two coils from the 10m A and 10m B band since the radio was converted to CB and I don't give a s$%  about. It will work until I can get two new ones along with proper 10m band cristals.

Regarding the 30m band I was listening to the marker generator but not to air signals in the end of this troubleshooting that took me almost 2 days I got a glimpse of the issue, If I bypass the first bandpass filter I can listen to 30m band so it means either the relay of the input is not operative (the relay or the control lines) or the band pass filter is open or not switching. Some hope!

The 30m band second filter from antenna (in red): 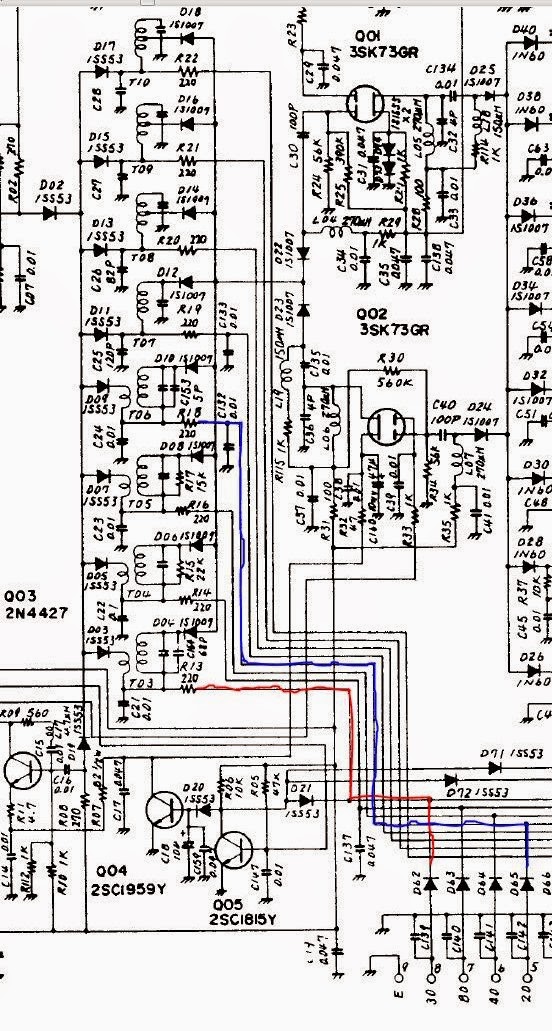 Here's the problematic LO for the 20m band: 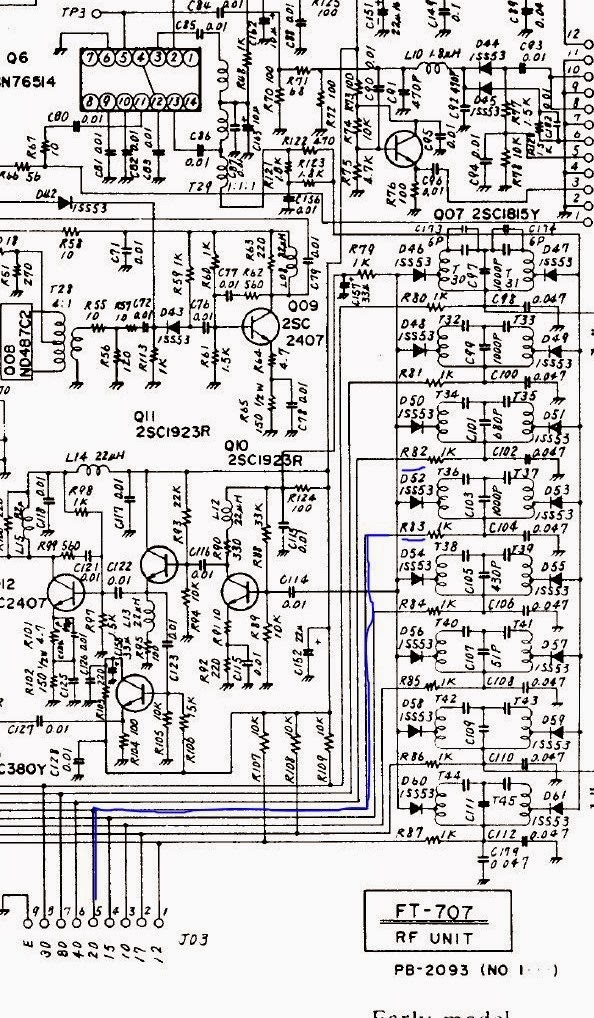 More fun for the next few days...