External VFO controller for the FT-102 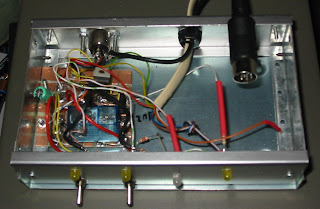 Had been without time so no updates were made on the last days but today I got some free time and on we go with the projects.

I decided to call this project an external vfo controller for the FT-102 since it doesn't mimics all the functions of the original external vfo but it is adaptable to any external vfo in the range 5-5.5Mhz with 130mV (or something like that) output powered by an 8v supply. Mine was an FV-107.

I did lost some time making this simple schematic just because when reading the FT-102 schematic I was seeing the ouput of a simple zener regulator as the imput making no sence to as the FT-102 controls the external vfo, in fact as soon as I placed the din plug on "ext vfo A" of the FT-102 it came to light. When you connect a plug in the external vfo A of the FT-102 he simple disconects the power supply from the internal vfo, ther's a connection so you can power it again. That's is how "control" is done. Ext vfo B it's just used to give indications on the mic buttons and internal reference oscilator case you use an pll.

Another issue that arrived is that the 12v present on the ext vfo plug aren't enough to power an hungry FV-107 with all the lights on ,so I just used the vfo part and not the christmas light's part, after all I just want ot make split's biger than 10Khz given by the internal vfo rit control. I still placed a capacitor to minimize power on current but it wasn't enougth, probably changing to an external power supply would solve this issue but wanted to keep it simple.

I think the "external vfo A" din plug on the FT-102 is not a standard one but you can "convince" a "normal" din to fitt there, assuming it has the same number of pins!

Here the schematic and the equipment working on an action video. 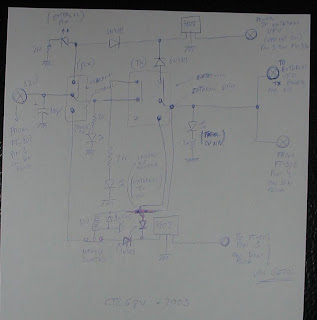 As soon as I found a cheap reduction drive and a nice capacitor will make an vfo smaller than the FV-107 so it can take less space and free it to another project.

By the way, I did this just to see if it was possible since my last QSO was more than an year ago, I gess I prefer to brew and no to chat.
Publicada por Ricardo - CT2GQV em 11:55 AM No comments:

One of the Yaesu FT-102 problems besides the relays is to get an FV-102, the external VFO, except this issues it's a nice radio at least better the ones I built...so far!. I dig around for a used FV-102 unit but the ones I found are too expensive for what I wanted to pay for legacy IC's in a box. I had two chances, to make an external VFO or to use an allready existing VFO from other radio. Since it's hard to make or to find good tunning capacitors with good reducion drive and dds/pll/etc is out of the question, to keep some signal purity, I went to the secound option; use an FV-107 as vfo for the FT-102.

The circuit is not finished yet so I will post the result when a repetible and clean assenbly is done. VFO interface and control is not completly linear in the FT-102 and with schematics on paper it took me some time to figure it out on what had to be done. See the video to see what is possible allready.
Publicada por Ricardo - CT2GQV em 9:53 AM No comments: 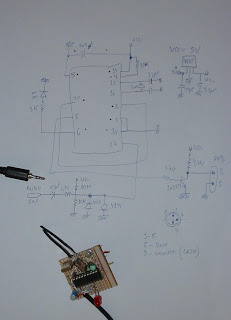 No big story here, at the same time I was looking for an APRS tracker found some schematic for an pic APRS decoder so why not build one also, I have no use for it at the moment since I make APRS on the TM-D700 but will probably incorporate it inside one of my vhf receivers or to take along on vacations.

I didn't compared side by side with the TM-D700 decoder but without optimization and using the ruber duck antenna inside house with the TH-F7 handie I think I got arround 20% of the packet's transmission. Probably with a good radio and some optimizasion the circuit will get 80% of it.
For testing I used Linux "minicom" software at 9600 8N1 without software or hardware flow (there's no flow, just receiving). The radio was with audio at mid volume seting.

Got the software from: http://www.ringolake.com/pic_proj/zcd/zcdmodem.html
Select "Simpler one chip ZCD decoder Both PC and GPS versions" (Simple decoder" button). Download de zip file, all the necessary files and schematic are there and also improvments for the circuit (I didn't do that).

For the pic programing I used the following command on a linux shell:
picprog --input-hexfile simpler_rx8.HEX --pic /dev/ttyS0 --burn
The pic programer hardware is at: http://speakyssb.blogspot.com/2009/08/pic-programing-for-aprs-tracker.html in this blog.

The PIC is an PIC16F628-04, I tried to use an 4Mhz ceramic filter as the oscillator but only the quartz crystal worked.
Publicada por Ricardo - CT2GQV em 1:24 PM No comments:

The good and the bad news on the airband receiver

The bad news first.... my Si570 kit is broken... not completely but can't see problem with it, probably the chip is dead.

The good news... I made an ne602 vhf vfo to temporary replace the kit with an air coil and and some more components and can finally have acceptable reception on "Volmet" frequency also changed the mixer to an ne602 and the AM demodulator to an TCA440 that I had bough some 6 years ago and never had used it :)

Will post some pictures the next days since right now you will only see a bunch of wires connecting the boards and the vfo is not as stable as I want.

I am quite sure my previous unsuccessful attempts were some how related to poor construction technic and bad IF selection.... the frequency I was interested was 126.400Mhz, if you put an IF of 10.7 one of the products will be 113.7 and the other will be 105Mhz... right on top of a local FM broadcast frequency... now the IF is 455Khz.

Design is based on this one at: http://hem.passagen.se/communication/pic/118sch.gif
except my rf preanp and vfo is diferent and there is a resistor and capacitor from ne602 to 455khz filter as per ne602 datasheet.

Here is the video. First image is the audio amp/speaker in the box then moving the camera do the left the rf preamp and vfo/mixer and more to the left board the tca440 demodulator, the big blue cap between pcb boards gets the IF output from the ne602. In the middle of the video you can see my finger de-tuning the vfo coil.