Nothing special here, in reality it's not based, it's an exact duplication of the Ramsey Electronics Model No. SM-1 schematic at: https://docplayer.net/47428799-Ramsey-electronics-model-no.html

The manual does not have instructions on how to set the two variable pot's but basically you only have R16 to adjust internally when your audio level is enough to deflect the meter.
In my implementation I found the meter does not deflect the full scale it does after changing the meter to a 100uA one instead of the 1mA but since it's a relative measure it does not make a difference. Also I have to set the level pot (on the front panel) to the max I can adjust now full scale, in the future I can just bypass it. Regarding this I could not test yet with an FM radio and a proper signal generator set to 3Khz deviation and 1Khz audio so ended up injecting audio from a function generator, should be close enough.

Notch at 1Khz, this where your radio will be running in optimal performance representing max level of signal with lower noise: 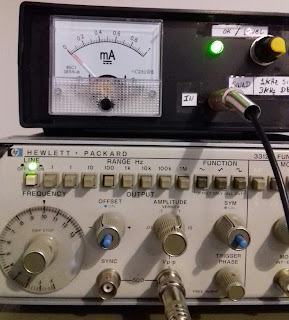 Level outside the 1Khz frequency (200Hz in this case) representing the noise: 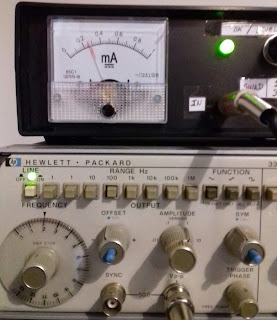 Add: After changing the meter to 100uA I can now adjust to full scale.
During testing: 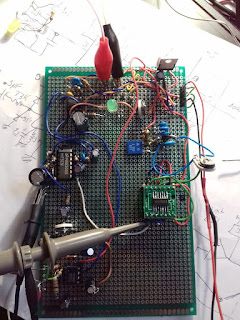 I experience some problems on the 400Khz divider part of the circuit because I tough I could get away with a different IC for the same function and not the referenced 74HC74 in the schematics. Placing the original fixed it.


Have a nice day!