Nothing special, just me, never learn...

Some time ago I got an Yaesu FT-7 from a friend to repair/check along with an FL-110 companion amp.

I swapped something for the FL-110, fixed the FT-7 and handed it to is owner.

3 weeks ago saw one for sale and in good condition... so why not..I already have the RF amp for it (the amp was intended for the Speaky transceiver)!

With mic, manual and power cable: 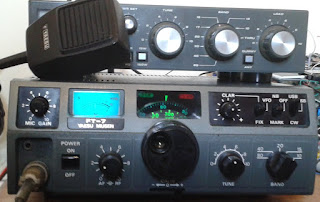 And bellow the FL-110 amp I have in Portugal along with my friend's FT-7: 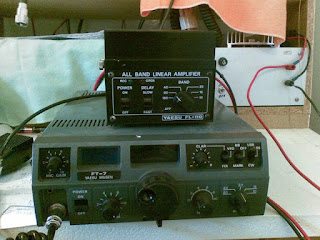 ...In the mean time started another project:

When finish will post more details... hopefully still this year.

The number of LF receivers (mainly for NAVTEX on 518) I made only has parallel with the number of Airband ones.
This receiver originally was made in a breadboard but I was having some reception problems and didn't like the appearance, so, ordered a Bitx 20 PCB from India and reused the components. Basically it's very similar to the Bitx design with only small changes.
After completly built I discovered the reception problem I was having, on the prototype board was one of those pesky CFL lamps. Discovered that already on testing phase of this new one after one day when my daughter turned on the lamp from the hallway, which was allways on when I did the tests on the previous board. This "new" one was having the exact same issue, lots of noise. Live and learn. Never mind, I think this one is much more "clean" inside.

Well, has I was saying is a Bitx 20 PCB and schematic (without the TX part) but using ADE-1 mixer and with an AD9850 DDS as VFO.
Input filter is a 500Khz low pass (or arround that, still needs validation) and the RF input is on the mixer IF port because is the only input/output on the ADE-1 that can go to 0 Khz and less than 1Mhz.
In practice 0 Khz is not obtained since it will beat against the VFO and BFO, also noticed that bellow 20Khz it starts to appear a lot of "artefacts" (so it looks like) due to being close of the BFO

I have been having some fun receiving time signal stations, LW stations and even stations on the 500Khz fringe. That include 60Khz MSF from UK, 77.5 Khz DCF 77 from Germany, on the LW: RTE from Ireland, BBC UK, RTF France, and MW: RNE from Spain on 558Khz. Also allready received NAVTEX on 518 Khz.

(here still in prototype tests showing VFO frequency for DCF 77 station)
"IF" is also different from the original Bitx, I used 8Mhz as my IF after selecting crystals for the filter.

On to more details:

After the filter it will go to the 2SC2570 preamp and only then to the mixer as on Bitx, I also tested with an 2N3904 replacing the 2SC and it also worked. Next step will also include a switch to bypass the preamp and a switch to use an active antenna injecting 12 V on the line.

The ADE-1 placement as per original design: 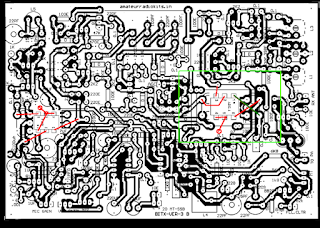 Note: pin 2 and 3 of the ADE-1 should swapped from the original schematic if you want LF range or the "normal" range/arrangement of the mixer.

Schematic with the mixer part: 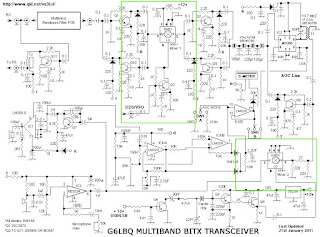 Ignore the circuit outside the green box's since I used the original Bitx on the other parts, it's just to show the ADE-1 connection on the VFO and BFO side.

The inside of the "rig": 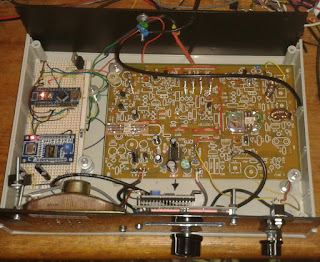 ..still a proper antenna connector needs to be placed.

The Arduino code used for control of the VFO is just an adaptation of other code I made for other project. Basically navigates by press of the encoder betwen fixed channels and then you can fine tune the frequency of that channel. No provision for saving, also will not post code, if needed ask, I can provide.

The DDS connection to Arduino is like this, just use the "green" part, I'm to lazy to draw, so I reused AD7C nice schematic for display purposes: 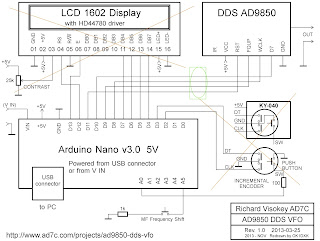 The channels I programed so far in code are:

Note, I programmed directly the VFO frequency on the stations array.


Antenna I used so far is just a indoor single loop with 70 x 70 cm and no matching directly to the input filter.
Volume is a litle on the low side, I think mainly due to low gain of the antenna and low noise of the Bitx design.