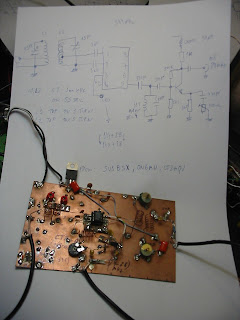 I understood one thing, if it was easy for hams to do high performance equipment there were not many radio equipment brands.
Getting to an acceptable level of performance takes time and many trial an error experiences, since I have some time I will continue this quest learning something along the way!

As we say locally... "each shot, each blackbird" ...this one is another missed shot

This schematic it's based on parts from others schematics and the local oscillator is from the Si570 coupled trough an more or less 144Mhz dual coil filter (on the right of the pcb board but not on the schematic). The transistor is an BC547.

One thing for sure, my somehow lack of sensitivity on the receivers is mostly caused by the lack of experience in input filter build and of course lack of proper materials, for the coils build I am using wire from cat5 network cables and recovered from toroids of computer power supplies.
Publicada por Ricardo - CT2GQV em 2:12 PM No comments:

Sunday I was testing a new schematic for the airband (or anyother band) receiver...again....it is based on a converter from 144 to 28Mhz so I set the IF of the Si570 board to 28 connected the output to my HF receiver and to check if I got some real transmission I left the TM-D700 on the same frequency that I was listening on the converter that way I could "see"(on the D700 s-meter) real transmission and ear the same on the converter (hopefuly) unfortunatly when I left the shack I forgot to disconnect the TM-D700, both the TM-D700 and my TS-50 are powered by a small solar panel and a batery, result: today when I went to the shack the power on the battery was 8v.... so did no test today.
Here's the solar instalation description:

A small solar panel (I think it's around 12w and 18v) a charge controler (a simple based LM317 13.80V regulable power supply, batery is 13.8 nominal and the LM is set for 13.99).
The design is similar to this ones except the bridge rectifier and transformer were removed since the input power comes from the solar panel . Batery is a car type (cheaper and will do the job) of 45Ah:

This allows me to be an full afternoon with both radios on althoug it can't hold an full day since the discharg rate is higher than the charge one and I never optimized the charger or the solar pannel angle and orientation. Anyhow it's a nice backup system.

The solar panel (bellow is the airband antenna, it's temporary :)): 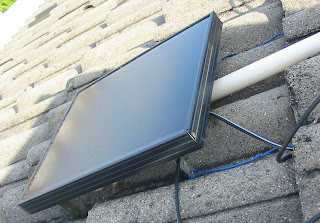 The charger (yes, it is Tuna fish in vegetable oil): 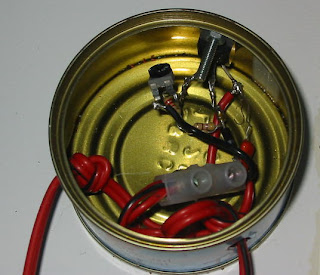 The charge meter (never gets more thant 200mA, the meter was laying around in the shack so no need to put another one): 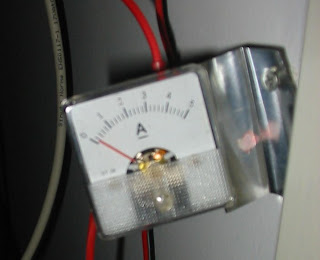 The battery (I move the battery a litle bit from time to time to don't let the lead sulfit settle in the botton and short the batery life, it is working for around 4 years): 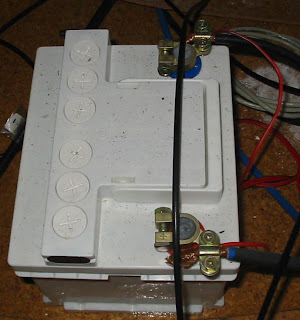 Some 40 Years ago one guy was the first (that we know of) man to put a footprint on our beloved satellite, the moon....but what that has to do with the BF981...I was thinking if I did the receivers for that transmission probably some millions listening to the tv set only could ear static.... I am still perfecting the airband receiver and now with the a BF981 as an preamplifier, tough not much improvment made, probalby next sunday I will experience a litle more and post some schematics.

I am using schematic parts from here:

Bough some spare BF981 and now will try using it as a mixer from the EI9GQ schematic.
Publicada por Ricardo - CT2GQV em 10:40 PM No comments:

And the Airband Receiver....

Just when the receiver was somewhat acceptably working and before placing in the box, I place the box above the input filter....result, some damaged coils, rebuild it but couldn't get the same "acceptable" performance. Made a new input filter but now I'm back to were I was before; "good" (some distortion and big signal) commercial FM reception but poor airband AM reception, tested a new input bandpass filter design but something is not working 100%, don't know if it is the pre amplifier or the 10.7 IF gain, I just can't get the performance expected even on S3 signals on another receiver, I get nothing or at best a signal near noise floor.
Tomorrow is another day....I give myself some more two or tree days to find the issue if not, will build another receiver based on another chip or transistor mixer or even an SBL-1 I am getting a little tired on this IC

If anyone has an reproducible and tested with good performance design with the TA7358 please send it to me :)
Publicada por Ricardo - CT2GQV em 10:33 PM 1 comment: 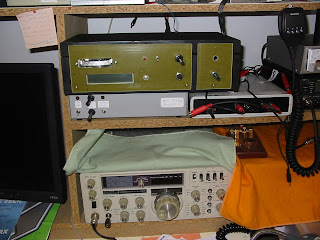 I have been busy with things not radio related but even so found some time to start making the airband receiver box.
Due to current aluminum boxes price's I decided on another approach, a wooden box... calling wood it's a little understatement, it smells like wood it touch's like wood but I think it's a mix of glue wood and probably plastic made in the Orient. Anyhow for the price it 's cheaper than a normal box, no shielding tough....cost was 5.50 Eur plus the pcb for the front panel (4.00 Eur).

Painting, my black paint was ending so it was just first hand: 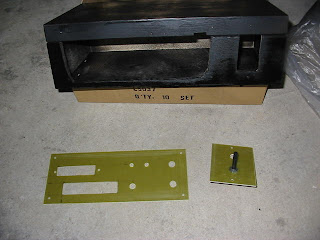 Were it will stay, bellow is the APT satelite receiver and the PSK interface: 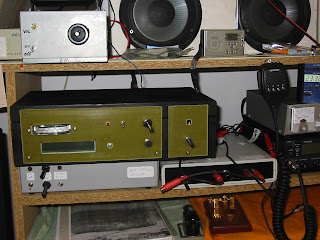 For comparator with a know brand radio:

Inside with the audio board fitted: 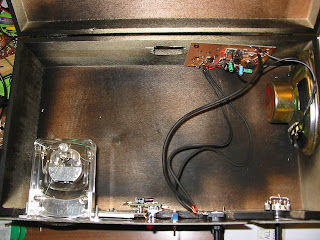 p.s. Today it's Nikola Tesla birthday, the inventor of Radio......or was it Maxwell, or Hert's...no.... was it Marconi? Anyhow thank you Tesla for those 220V electric shock's I got ! Better AC than DC
Publicada por Ricardo - CT2GQV em 10:18 PM No comments: 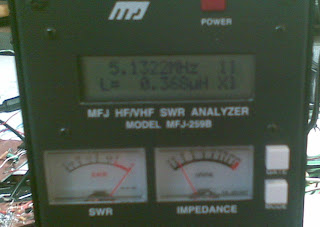 I have on of those MFJ almost anything meter. It work's but sometimes it's difficult to measure some components since the input plug is a PL plug so I made a small adapter for it. Nothing high tech just a male PL plug and two crocodile claws, maybe the hardest part is to solder the claws to the plug. The internal cable for the "live" terminal is a small peace of rigid electric wire. You have to account for the meter error and for the size of the wire when measuring inductance. For the test I made it's somehow accurate and enough for amateur use the inductor being measured was sold and is marked as 0.33uH. 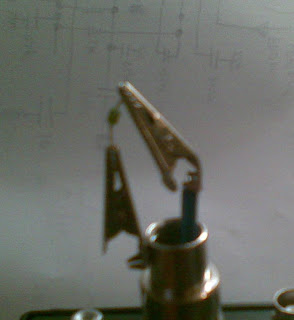 Meanwhile I have been improving on the airband receiver, it seems that I didn't had enough filtering on the TA7358 input. As soon as I have an acceptable schematic I will post.

Sorry for the photo quality but only had the mobile phone available for taking the photos. If you don't like I accept donations of a new camera just for being in the shack:)
Publicada por Ricardo - CT2GQV em 8:01 PM No comments: