12 Months, 12 projects and some other posts.

"...Happy New Year!
I'll try this year to post more project's, (at least one for each month) and some more simple ones in the middle, that including the failed experiments (I do have them). ..."

I managed to reach the set goal with my previous post (the 200 W 30db attenuator), still, posted none about failed experiments (there were).... anyhow there's still some days left to the end of 2019....

P - Back to the future - Arduino DCF77 transmitter


... to be honest I have more projects done than the posted ones but have being lazy in publishing them.

Have a great weekend!

Between buying a 200 W probe/head for the power meter, a pre-made 30dB attenuator or making this project I chose the last option, it will not have the same frequency range but it's a lot more fun and a little cheaper . This attenuator is a nice way of extending the range of my existing 2 W power head URY-Z2 until the 200W mark. I wanted 200 W because in the future I need to test the FT-102 capable of that value.

The end result for the impatient: 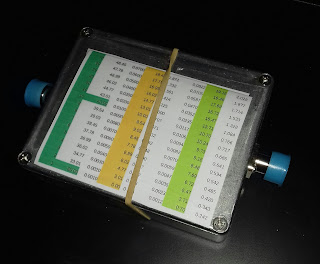 The main schematic for the 20dB part is bellow. I added a after a 10 dB attenuator on the output, that was made with smaller resistors since it just needs to handle part of the final 1.7W (see further down the power distribution in the attenuator). 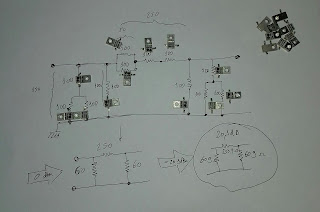 Keep in mind that the previous schematic only handles around 80 W if using 30W resistors. Most of the power is burnt in the first shunt.
A simple test layout diagram: 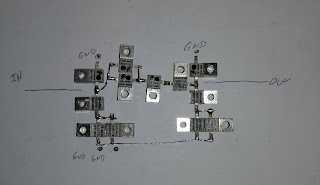 The attenuator is only composed of 100 Ohm resistors (cheaper than the 50 Ohm ones on the flea bay) with the two terminals isolated from ground, so it was nice exercise to calculate and attenuator under this limitation.

In previous setup and at 50Mhz, the attenuation obtained: 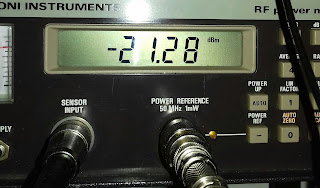 Not bad since the calculated value it's not exactly 20 dB. 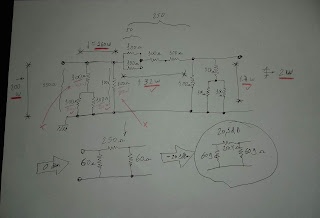 (addendum: just realized the power on the first shunt is miscalculated, should be 100W on the 100Ohm resistor and a total of 66W on the series 100 ohm with the 2 parallel 100 ohm)
The X marks the resistors that will be under power at an input of 200 W so the 100 Ohm (on the input, left side of the first shunt) taking 80w (100W is the correct value, see addendum) is now composed of 4 resistors, capable now 120W dissipation in total. 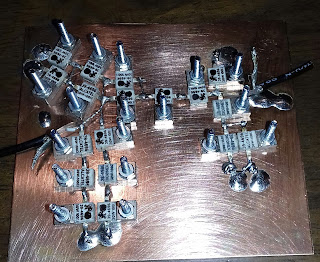 ..and are the 4 ones diagonally oriented on the left top.

For the ground plane I used copper plate with 0.6mm tick and it had to be partially soldered in the oven, the iron just could not make it, then on the final assembly the iron just had to do the final touch. 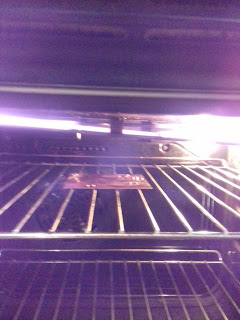 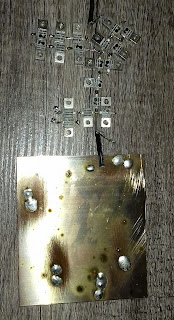 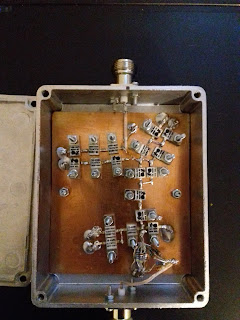 The end 10dB attenuator added is the "mesh" on the lower side of the picture/box.


I include glued to the box a chart with the output value in function of the final attenuation, the measured one at 50Mhz (29.39 dB) and the calculated 30dB, this way if I don't set on the power meter the correction I just look at the table: 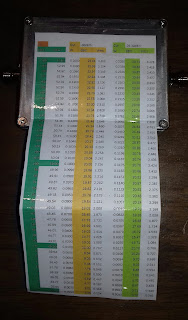 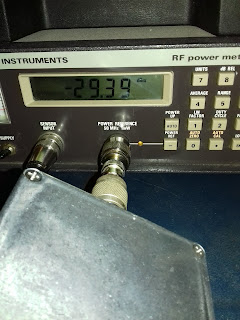 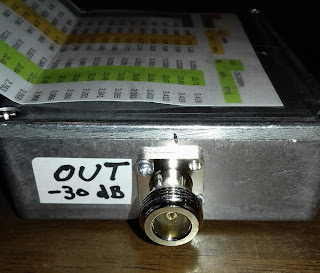 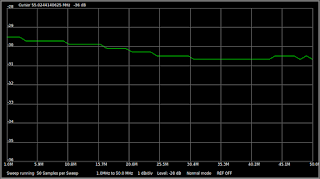 ..still need to validate with more accurate power meter than the AD8307  from my homemade "VNA" and with a proper reference set, never the less looks OK for the type of construction involved.

Addendum: (2021-01-03):
I have now the chance of testing against a spectrum analyzer with tracking generator, graphs plotted bellow: 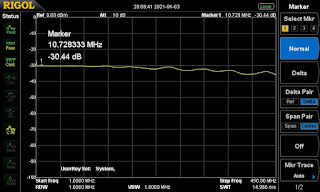 At 145 Mhz starts to increase the attenuation, so I can consider it flat until VHF, not bad: 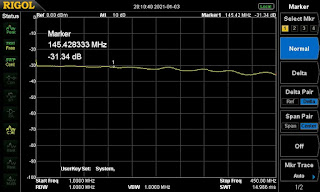 If corrections are made for the change in attenuation the useful range can be higher. 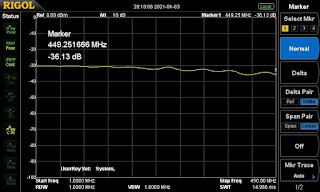 So far I only tested with 100 W, gets only mild warm for quick tests, for extended periods it might need to spread the resistors a little more and possibly include some thermal paste and better heat sink.

Approx cost of the project was as follows:


Have a great day! 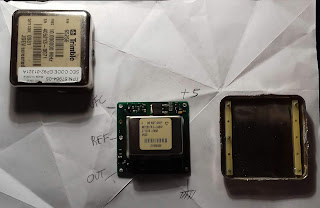 In relation to the Vectron module, look's like this is the data-sheet:


This is a 5V version of the Trimble 65256, most of the ones I've seen advertised are 12V versions, I am running it with 5V but found no diference in the marking's to the 12V versions...
Apparently mine is out of spec when I compared with a 10Khz derived from a GPS source... that could explain the low price they have now on the flea bay, served their life and got warned out/out of spec. 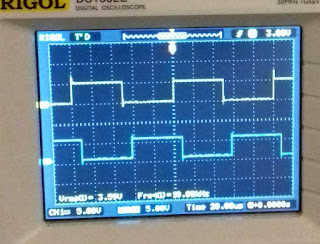 It's skipping forward around every 10s to the triggered top trace of the GPS 10Khz output. This is true for any of the control voltage range.