Day at the beach

Like most Sundays I go for a visit at my parents house.
The day usually begins with some sort of computer problem I must sort out...today it was no exception, the monitor of one of my father's computer didn't turned on, after the normal cable debug I fixed it really fast, exchanged the monitor and putted the old one in the things to fix later or for parts.... while I debugged the problem turned on the FT-102 on 20m band for some listening, and hell, even with the vhf dipole connected the contestants were putting 55, 57 on the southern Europe... who cares about QRP?! Anyhow, Im not a big fan of contests so headed to the beach.... much better, althoug the temperature was not that high, around 18ºC... :)
Here's something for the Eskimos: 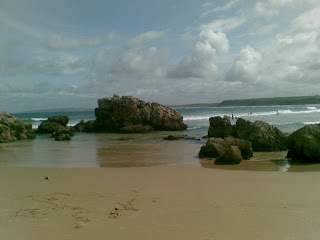 Meanwhile the tube/valve direct conversion receiver already works but I am having some impedance mismatch at the rf mixer output so will have to fix it without hopefully putting a, rare around here, audio impedance transformer.

I bough a spare ECC82 valve when I built the ECC82 regen receiver, already tried a valve VFO (worked), now decided to tryout a valve down converter as a first test to a tube direct conversion receiver. 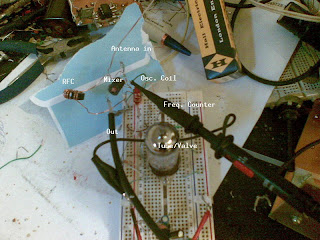 Basically one half of the ECC82 is running as vfo then there's a single balanced mixer and will be an audio amplifier using the other half of the ECC82.
Interesting thing is that this circuit worked first time, I even forget to count the turns in the mixer core, the rfc was the first coil I found from an old PSU and the mixer output termination was the first small cap I found...
Signal out is not much but hell what do you expect from a lousy mixer made from a binocular core and 2 diodes and 4m of cable laying in the floor working as antenna...


The oscillator was running at 6.7Mhz and I was listening on 365Khz so one of the received frequencies was 7.067Mhz... I promise a schematic soon.

Add: here is the schematic used: 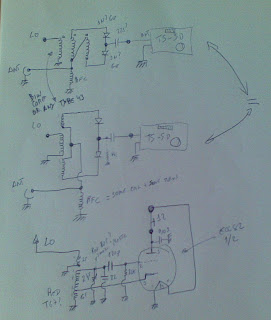 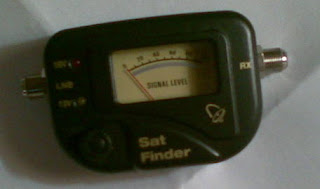 Being a curious "animal" decided to have a look inside the sat-finder, probably the only equipment I own that never had been opened for "evaluation".
Here's the outcome: 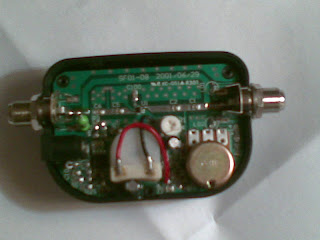 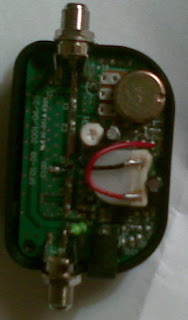 There's some common components an LM358 opamp and a "C1C" component I could not identify or find info about, probably a dual diode or some transistor but it's marked as U1... so it could be also an IC. It's for sure the first stage for measuring the signal from the line.

Found very few schematics about sat-finder but here are some links:

This one also used an LM358: http://www.khazama.com/project/satfinder/default-en.aspx
Homebrew but it could be very close to what's inside..

and this one: http://www.neazoi.com/echochanceller/Satellite_Finder.gif
Publicada por Ricardo - CT2GQV em 8:33 PM No comments:

Joachim's made a post about the use of 75 Ohm cable for ham radio. This is not the first time I see references to this subject but it's the first time I serious think about it.
In a first view I think it should be ok at least for reception or for moderate power transmission beeing impedance match just a small issue. I didn't checked all types of cables and ratings but it's somehow obvious.

This type of cable (75 Ohm) is normally used at TV/Satellite frequencies hence it should be good for HF to VHF and for sure UHF/SHF... but keep in mind that usually there's a mast amplifier or a down converter near the antenna/dish and that makes all the difference. The amplifier compensates attenuation losses and signal to noise ratio degradation!
If we look on the economic side then lets all jump and use 75 Ohm, the price difference it's brutal!
Here's a quick chart on some cables comparation with prices in the local electronics shop.

Now some quick tests with the MFJ antenna "analyser":

Keep in mind that I only used 1m cable length for the tests, I am sure beaviour with bigger cable lengths will be somehow different.

Let me have a little spare time to make some more tests, I have a spare 75 Ohm cable from the shack to the "antenna farm" that will be tested for sure.
For those who live in apartments with some restrictions on antennas it should be easy to justify a white cable going to the roof, just say it's for the satellite dish.

I'm currently making some tests with the 21.4Mhz filters bought in last ham fair for an Si570 based VHF FM transmitter. Tests are promising and looking good so probably a final schematic in the next few days.
Here's some images on progress so far: 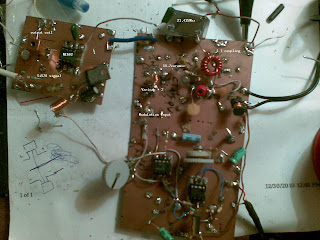 The original schematic, bellow.
Right now after some changes the tuned circuit on the 10.7Mhz oscillator/ FM modulator (21.4Mhz) is now on a red toroid. The output of the ne602 has an output coil of 6 turns on the NE602 side (pin 4 and 5) and 1 turn for antenna matching (amplifier strip later) hopping to give 1500/50 impedance conversion...or near :) 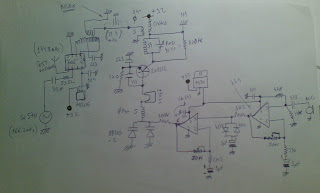 21.4Mhz filter is connected to the NE602 via a 10nF cap, so does pin 3 to ground. The 100K on the oscillator collector was removed. A small cap was added from the top the tuned circuit to the ground, there's a 56pF cap in parallel with the ferrite ring, resonance viewed by the dip meter is around 22Mhz, the red variable cap should put it on 21.4 after tuning.
Even with the 21.4 filter and the output coil I still have small harmonic leakage on the Si570 frequency - 21.4 * 2, that is: the frequency I hope to transmit (Si570 frequency - 21.4Mhz) minus 21.4Mhz, or Si570 frequency - 4 * 10.7Mhz :) Did not make yet tests on other harmonics. Si570 oscilation frequency is on the high side for that matter.


Mean while I arranged a secondary shack at my parents house, they were kind enough to prepare some extra electricity plastic tubing, when the house was built, from the shack to the rooft. That way it's easier to install antenna cabling. Unfortunately not all weekends I pay them a visit but it's nice to know that I am radio ready there case needed. At the moment I only have an VHF antenna tuned for the marine band but I left there a balun and some wire ready to deploy on a simple dipole form.
here's the setup: 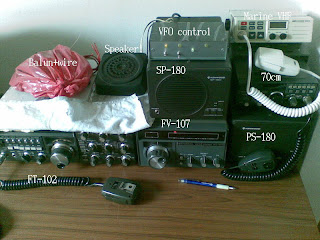 ..And the finished product... 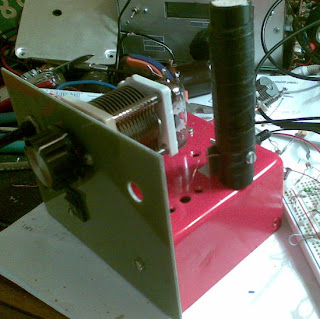 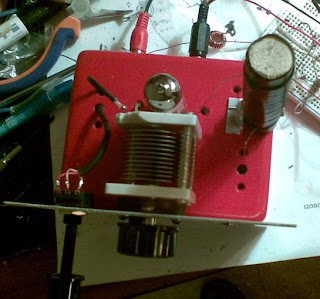 ..Sort of, there are still somethings to improve like putting a volume pot and antenna coupling. I didn't found yet the optimal antenna setting so will improve it in the future.
The schematic used: 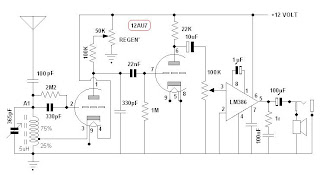 Well, this post is not exactly about building something, instead about some interesting things being done locally (country wise that is).

Some years ago when I was a kid (I'm still one) there was a TV program about ham radio in the state television. I remember seeing some episodes but the radio bug was not yet very present, maybe those programs had triggered that, can't remember now.
Anyhow thanks to some hams those episodes are now avaiable in the internet. For sure most readers don't understand Portuguese but an image is still an image.
By the way "Chamada Geral" is "CQ - Calling all" translated to Portuguese.

Here the links to some episodes.

Some more are being processed to upload.

Now the other subject...:

It's during the week of 15 to 18 of March in "Instituto de Telecomunicações – Pólo de Aveiro" (Telecomunicacion Institute - Aveiro)
This short course has no cost and it's open to everyone, be it a radio amateur a university student or any other person.
Just because of a logistic matters there is the need to make an inscription that you can do with Luis Cupido (CT1DMK).
I personaly would like to go but don't know if I have the chance. Aveiro is 133Km from my QTH so it's not that far but it's more than one day.
Here's the agenda: 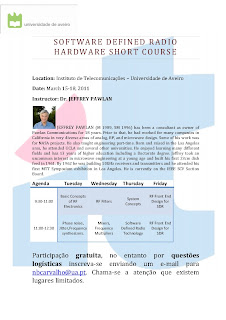 And a litle map to locate you. 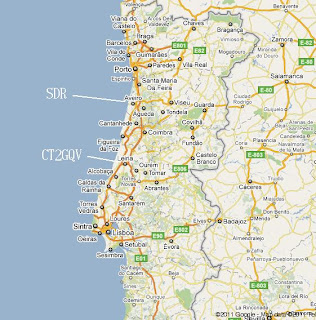 Now that I de-freezed, on to work:
Found a nice article on a 12AU7(ECC82) vfo here, decided to try out the circuit using less lethal voltages (I had my fair share of electric shocks if you know what I mean). 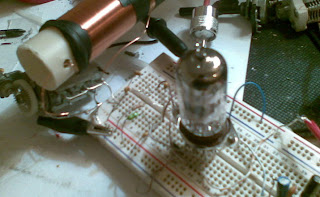 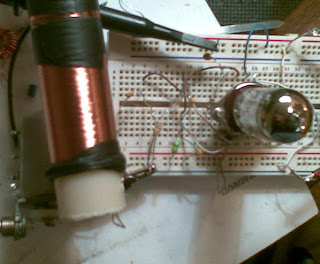 and circuit...you can find a clear one in the article link provided above. 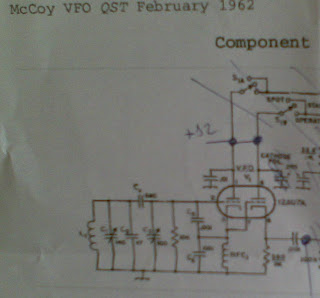 It works! The only hard part is to make the a coil for it. Mine was done with the cientific methot of trial and error...oscilates around 800-1200khz but I intend to make one for 5-5.5Mhz.

This was just a proof of concept but working with 12V supply and no buffer it can deliver about 0dBm measured from my NCY (Not Calibrated Yet) AD8307 power meter.

It takes a little to get into oscillation due to valve warming as you can see in the video:

Having time and a nice box to put it, looks like a nice little external vfo for one of my vintage HF radios....one of this days....
Publicada por Ricardo - CT2GQV em 2:15 PM No comments:

I was for 2 days in the Netherlands but I'm back for more soldering.
This is my fourth voyage to the Netherlands, a country with nice people and a nice landscape; always plain and people's always nice! The weather was as usual "bad" and I almost turned into an ice cube during my stay there, here in the "south" we are not much used to temperatures bellow 6ºC... in the winter... in the morning! Got -2ºC there during most of the morning and evening.

So, here some photos of this journey: 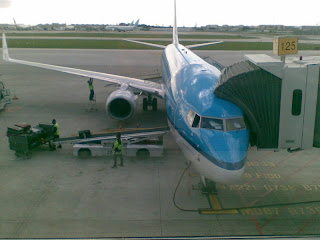 Nice little airplane of KLM, the Royal Dutch Air Lines in "LIS" plate. No problems, no waiting for landing slot, all went smooth, just some normal turbulence on the Golf of Biscay, typical. 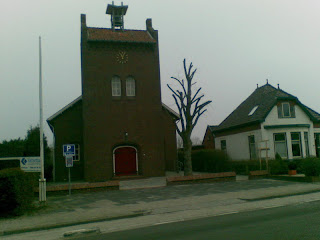 Roodeschool village, I think PE4BAS lives in this street, he gave me some helpful advices on how to get to his village (I went to a place near by).... unfortunately on the return the train got broke and I almost missed the airplane, if you saw yesterday a guy running like hell in Schiphol airport, that was me,... Murphy's law on it's best. Bas, PE4BAS warned me not to take the train! 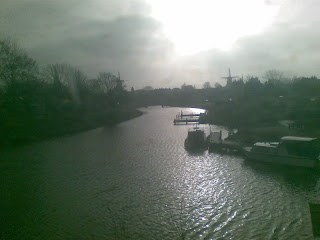 I think everybody in the Netherlands owns a boat... 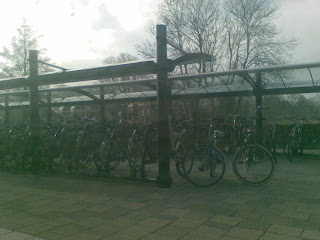 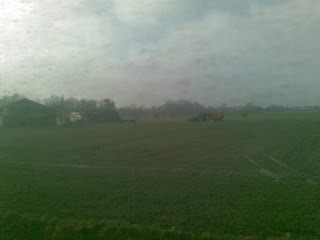 Typical landscape from the train window.

I hope to return the Netherlands when things get a little bit warmer :)