I've done a previous repair on this device because I got it without being working on the 18Ghz range. I suspect this will not be the last one given it's age.

Anyhow, one of this days I turned it on to check the output frequency of a FVC99 module and it was displaying all entrance selector LED's on (should be one at a time) and no change on the input by pressing the band selector. Also there was no activity on the display for the source locking.

I suspect the usual bad contacts (it's slot based construction) or power supply, more to the power supply side since the equipment hadn't been moved (it's a bit sensitive on moving/vibrations and that had been the cause of the first repair). 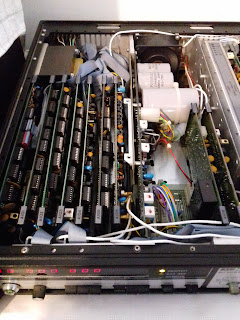 First thing I did was removing and inserting all the boards one by one trying to find the one responsible for the selector LED's, I have the manual but didn't feel like to read it. In the end, had no luck. Then I realized there's another board that does not slide, instead is attached to the side panel. So I moved that one to the side and checked all the connections. 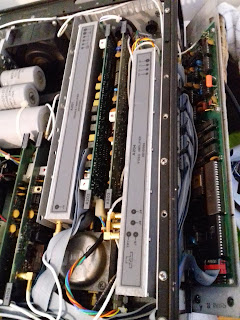 Image, now, after connecting back, started working, I can now select the input and have the digits lit: 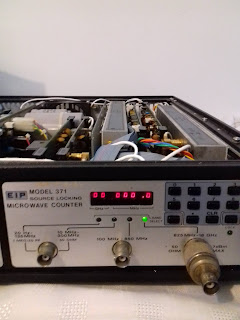 I can measure again but I'm preparing a home made counter in case this one fails again in the future.