Another SWR meter (part I) 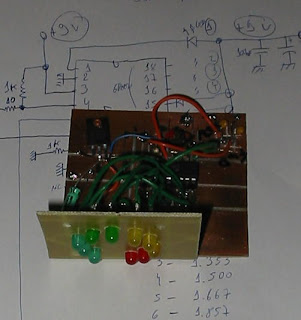 Yes! Not happy with so many unfinished projects and with already two swr meter's made and also without the need of a third one I found a nice little project that was begin g to be made :)

This one instead of a cross nedle meter or a simple micro amp meter uses the famous LM3914, funny thing is I had never used this IC before.
The RF front end will be based on another one that gave me nice results, will post that another day.

Since I removed the 100uA fron one of the swr meter's to use as signal meter on the HF transceiver (beeing built) this is the right project to use in it's place. The PCB will fit on the space left in the front panel of the meter that's the why of the round placement of the LED's.

Now the nice part, schematic photo or photo of the schematic... 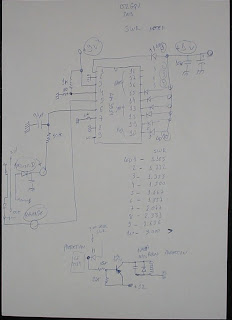 p.s. Do not duplicate this circuit, I am having a little difficulty putting it to work as expected (the LM3914 is way to sensible in this configuration...), and by the way, the LED's color/sequence are reversed....that's why I say, never trust a schematic done by others, including myself :)

p.s. II ...I forgot I was doing the rf pickup and the display on two spearated boards so the grounds are separated...you have to have the ground loop..... anyhow it's still not perfect I an making more tests.

Hi CT2GQV,
I found the scematic on internet as well and built it. It looked a nice simple diagram ....but it does not work. Checked all the connections but I made no mistakes.
When I attach +9V and +12V only the LED number 10 burns constant. No matter if forward and reverse are changed.
I did see that on 2m at about 20W the LED turns off ....strange.

Did you get it to work or is it another failed experiment as many others here in the shack :-) ?

I never got it to work, it's on standby for one of this days. If you read the (p.s.) in the end of the article it says not to be duplicated :) I think the problem is some stray RF entering the LM3914 part but I never confirmed. If I put it to work one of this days I will post in the blog.
Thank you for your comment.
73 de Ricardo - CT2GQV