A friend gave me one of those new computers....a tablet...:) 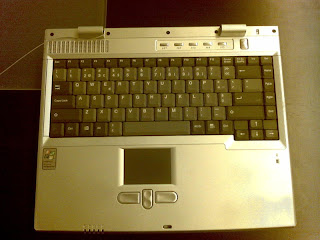 ...never mind the missing screen (there's an vga plug), it works and it was cheap!

My idea was to put Linux in it and use at the weekend shack, it came with windows something installed and for now will stay that way (sure not for long since I'm a bit allergic to that OS).
After some psk and rtty decoding apps installed, decided to hook it up to the FT-102. I was a rainy day and I was getting a lot of interference, I thought it was the weather but after shutting down the computer I notice the interference had gone and the only (confirmed) source was the computer power supply! Rat's! Something had to be done....

So I came up with the idea of making a mains filter idea. The other option includes a Faraday cage for the power supply or getting another computer.

Here's the assembly of the interference filter for the mains power supply: 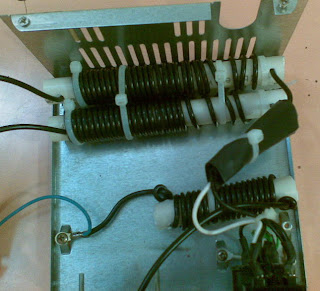 well....did it worked?.....no and not tested yet, after powering it up (I should had tested before closing the box) the VDR blew up, I guess that it was underrated or I didn't looked very well to the schematic of the donation computer power supply were I removed it and probably the VDR was not on the mains line and was not rated for over 230V.

Now that I removed the broken VDR I have to wait for the next weekend to conduct further tests. 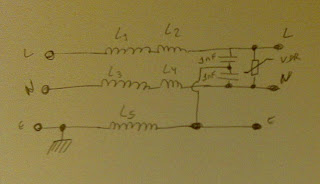 ..never mind the VDR (it's just for spike protection), it's not installed at the moment. If you duplicate this, get capacitors rated for at least 500Vrms, the ones I used are rated 1KV and came from a computer power supply.
The number of turns it's not critical as long as they don't create a lot of impedance on the mains 50Hz....I guess something bellow 1000 turns it's ok :) The idea is to create some high impedance on HF and VHF.

I also placed a ferrite core (the ones used in computer power cables) around the cables as a "won't hurt, probably will help" option. 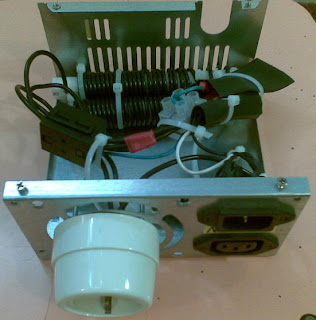 The white output is the filtered one (it's an old household mains plug), the other two are input and a not filtered output, they came with the donated box (a broken computer power supply).

There's no reason for this schematic do not work at least reducing the level of interference. If it reduces all ,then it's a bonus.
Publicada por Ricardo - CT2GQV em 10:40 AM 5 comments: Hiperligações para esta mensagem

I don't have much time to do QSO's, in fact time is short even for soldering.... but I have a new radio.... A "Dragon" delta force.... don't you just love the names some manufacteus give to radios? There's also the same radio under the "Magnum" brand. Probably one of this day's someone is going to build the "Kalash terminator" 10m mobile.... :)
Here's the lousy photo: 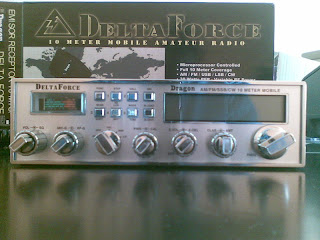 10m was hot today, I've heard a lot of QSO's and almost pushed the ptt to answear a CQ call from the USA...maybe tomorow!

My first impression on the rig is a positive one, it works and receives nice, vfo operation is not easy on 1khz step since it counts from 1 to 9 but then returns to 0 without increment the 10's Khz...! It's not build like Yaesu, Kenwood etc, in term's of knobs material and front panel (didn't looked inside yet) but enough for the intended function, a receiver for some dowconverter's I will build.
Publicada por Ricardo - CT2GQV em 11:08 PM No comments: Hiperligações para esta mensagem