Never, ever do soldering at a Sunday, instead go to the beach, the mall, the mountains, whatever!

Just broke one PIC16F84 on the aprs tracker! Why? A faulty 7805, probably a fake 7805, I am pissed of. Happened when I was rewiring the board. When I get the 7805 from the 78/9XX drawer it was different from all the others, it had a more glossy finish, I even tough that it might be broken but was the the first one I found in that mess. I already saw a lot of them in open circuit but this one was on short an powering the PIC from 11V, the voltage from my power supply; even so the circuit worked but not for long and today it came to an halt. I should have know, always measure the voltage after the regulator, it was getting to hot for the total circuit dissipation and was the only component getting hot. The interferences on the handie were also strange! Some outputs do work but not the squelch/audio part and can't read now the PIC contents.
Tomorrow will buy another 16F84 to replace this one. Everything was against me and even the handie I was using to make transmission tests lost the battery charge when I left to test the PIC on the programmer, it's now charging. Lost the patience for the day!

Anyhow... surfing the web to relax a little bit I found some "blog's" from people I previously exchanged some emails regarding homebrew; Al, GM1SXX (http://www.observations.biz/Observations_from_Scotland/index.htm), Bill, CU2JL (http://soldersmoke.blogspot.com/) and Carlos, CT4ER
(http://www.ct4er.net/index_p.htm). They are nice people and have nice web pages with interesting information.
Al was also brewing the "Speaky" transceiver, exchanged some emails with opinions, Bill made an DSB transmitter and asked him some info and I used a bfo schematic from Carlos when I was making my first, never finished, HF transceiver. 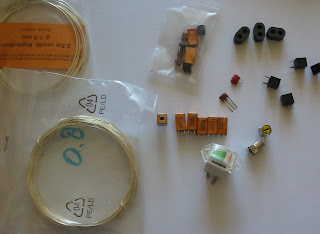 Now I can go on with the airband/vhf receiver experiments with new input and IF filters.

Silver wire for testing diferent vhf coils, Neoside 5061 (6) variable inductor for input filter (2 filter, one for 144 and the other for 126Mhz), four 455Khz filter plus two 10.7Mhz, different bandwidths. Two (yellow) 455Khz coils for FM discrimination, tree pig noses for an rf amplifier. 2 Neoside cores to make an vhf oscilator and a micrometer just for fun :) Not cheap but could not get it here localy so bough at Barend's shop in the Netherlands, I like that country! Barend's shop is at: http://www.xs4all.nl/~barendh/Indexeng.htm 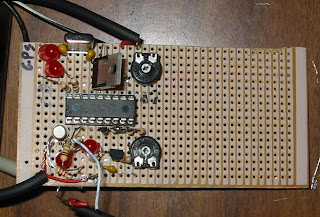 After programing the 16F84-4 PIC I placed it on a perforated board and start soldering.
This time no ugly construction technic, only ugly, because there were to many pins to solder on the PIC, this method is easier for this type of circuit.

Schematic and software are here: http://www.qsl.net/zl1vfo/tinytrak/tinytrak1.6.zip
Cable connection for my handheld (TH-F7E) from here: http://digilander.libero.it/iz3kqq/APRS.htm (it's also on kenwood manual.) the radio is set as TNC for the external plugs, could be set as speaker, tnc or pc control for programing.

It was not that easy to get data from my GPS (Garmin GPSMAP 60Csx) since the GPS data signal was not being received by the PIC it's the old war between ttl/cmos/rs232/482....whatever incompatibilities :)
So I made an level converter a simple comon emitter with an 2n3904, any npn will work, (incidentally is also an signal inverter) so I could feed the data to the pic. Strange is the on the Garmin side I have to place the ground to data out and data in on the pic to ground..., is Garmin wrong on the manual? It's the pic software or it's because of the inverter circuit.... should work on other gps without inverter so it's not on software.... oh well...

The LM7805 gets a little bit hot for my taste so will lower the input voltage putting another regulator that way I will get the same dissipation but will be divided by 2 devices. Eventually will be powered by a 7.2v source.

Programing was almost flawless except for a small short between tracks on the board that was not letting me to read or write the PIC.
The software was "TTconfig 1.3" but had to install some perl modules needed:
Tk::TFrame and Time::HiRes
basically nothing more that issuing the following command: perl -MCPAN -e shell
and then this one: install Tk::TFrame
and: install Time::HiRes
questions?....read the INSTALL file on TTConf-1.3 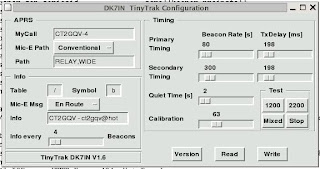 Made some testing tone transmissions, looks clean althoug only tested with the tone features, as soon as I remove the pc interface will place the gps input again. next time I will place a 9 ping plug because it's easier than soldering the cables for testing.

Now it's just to put it on a box get a data plug for the Garmin unit and start beaconing aprs... will use the rest of the perforated board (it was expensive 6.12€ for a 100*160mm, used about 1€ on the tracker) for an aprs packet decoder.... but that's for another day.
Publicada por Ricardo - CT2GQV em 9:26 AM 1 comment:

Funny thing was when I studied electronics I always considered digital being a subset of the real electronics. Having already done some digital circuit's I did see that was not all that 0 and 1's.

I wanted to make a bicycle mobile APRS setup, considered buying one allready made but that is half the fun an double the price. Searching for some aprs trackers settled by the standard "tinytrack" got the software and bough some PIC's (eventually some will get hurt!)
For the PIC programing you have to have a PIC programmer... decided to make the simplest (not always a good choice) PIC programmer I could find.

This time I made the circuit in a prototyping board since I was easy to remove the pic after programing and "zif" socket's were out of stock in my local electronics shop. The board still had in place one 555 IC and a photo transistor but honestly I can't remember what was it... an light controlled oscillator or something similar.. 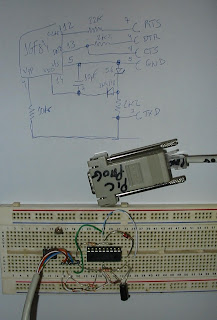 The circuit worked first time (had no 5V6 zener so placed a 5V1) but before real programing I had to compile the picrogr-1.9.0 software on my primary Linux system, if you don't use Linux, IRIX, AIX, SunOs (love them all, but Linux is cheaper) or any Unix like....I am sorry for you, can't help you, you are on your own with that buggy lousy operating system called.... :) I even can't write it's name but starts with a "W".

On a shell you can do like this, assuming you downloaded the picprog software (Thank you Jaakko Hyvätti
for the software):

Connected the programing circuit to the computer first serial port ( /dev/ttyS0 ) with the PIC16F84-4 already in the circuit and decided to read it's contents:

Here's a simple circuit for the sunny days

Found a simple HF preselector circuit on the web and decided to try it out.

Basilcaly it's a variable tuned LC circuit between input and output...

I tested with 14 turns acording to schematic but only got preselection from 18 to 28Mhz then I add some more turns to 25 and got the 40m band also, tuning is very sharp, my variable capacitor is from one of those cheap radios and with all the plates in parallel to give about 240pF.
Take not that my tests were only against the antenna analyser, circuit input to signal out on the meter and circuit output to a dummy load, tuning was made until get lowest swr on the metter.

I decided to try an "air core" to see if it will scale to vhf, it works but in VHF work things must be well planed and it need's for sure an blindage of some kind since I placed between the antenna and my TM-D700 and I got more 1 "s" unit.... could also be because of metering circuit on the radio but probably was the air core was getting also signal. anyhow will test again against the airband receiver. Since my last testing on the airband receiver now I have too much signal...from a near by broadcast station and have to get rid of that. 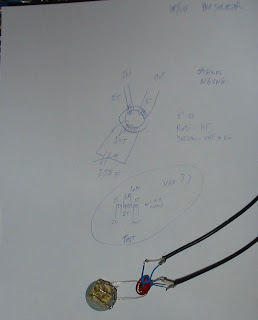 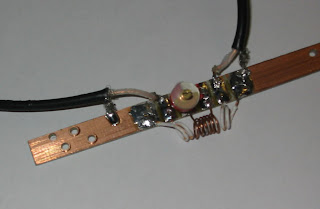 Since it's still summer and very hot around the post's will slow down...
Publicada por Ricardo - CT2GQV em 9:28 AM No comments:

Bough one table top mic! why? The price was nice and I need an microphone for my next transmitter project...eventually one of this days.
Of course I already opened it... it's an simple circuit with an sliding switch and a RC filter connecting to the Dynamic capsule. Will make an mic amplifier probably based on similar design to this one: http://www.zen22142.zen.co.uk/Circuits/Audio/ecm.gif

Size comparation with the Yaesu "something" (update: YD-148) mic: 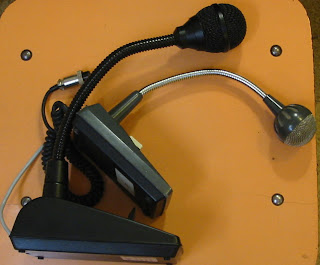 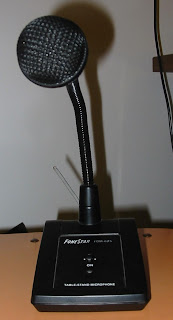 Regarding the previous post circuit, if you place an 3pF capacitor connecting the "top" of L1 and L2 the circuit works better on the airband frequency (and others) but not with the performance I want... so now I will get some "Néosid" coils and adapt a 137Mhz receiver circuit to the 118-134 band...
Circuit will be similar to this one: http://lpistor.chez-alice.fr/imagesite/radio/radioorig/rx137simp4.jpg