Not much time for electronics so not much postings here.
Had a little time so decided to start on the new Si570 kit. It will be used for the VHF receiver exclusively. The other kit will stay in the Airband receiver...or will be used as testing generator...
for this kit assembly, since most componets are smd, one needs to have a clean bench so on to the cleaning.

From the mess to clean up: 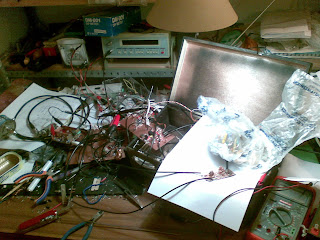 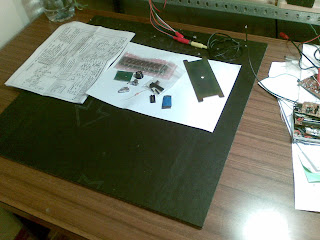 Some testing boards and Chinese store radios used for parts and frequency meter. 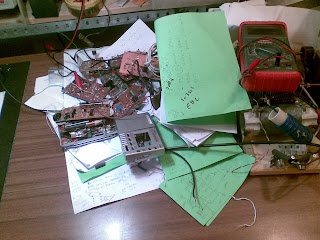 After this is done I have to put a lot of projects in boxes and make some calibration on my meters...those will be my future projects.
Publicada por Ricardo - CT2GQV em 3:41 PM No comments: 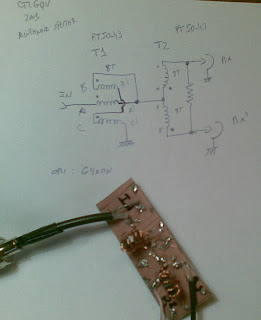 It's Saturday afternoon and I am a little bored...so... nothing like heating the soldering iron and make something interesting...or not....

Some time ago I found some receiving antenna splitter schematics and now decided to have a go on it.... I already had tested an antenna splitter ( without luck) using an cable tv unit. This one worked like a charm, of course port isolation, losses and other operational parameter were not tested...

Schematic came from this nice article: http://www.qrp.pops.net/swl-ant-split.asp
I just changed the number of turns to 10 on T1 and T2. The resistor is a 100 Ohm one. Today propagation was on the nice side and so there were plenty of signals coming to my humble 17m band wire dipole (homebrew of course).


In action both receiver on the same frequency (actually 2.5Khz offset):

Another one with one receiver at 7Mhz and the other at 14Mhz:

Didn't tested for now on the low and high bands since but I am sure it will have success also. Also I didn't notice any interference from both radios except a small glitch when powering on.
Publicada por Ricardo - CT2GQV em 3:28 PM 1 comment:

Now that that the vfo looks nice and works nice....I must found a better variable capacitor, this one only has reduction of 1.5:1, the "rit" pot could help the lack of reduction on the capacitor but I want something nicer... so I will put the assembly on the "finished but no use for the moment" rack.
The output without load is around 1.9V measured with the homebrew rf test probe... ( http://speakyssb.blogspot.com/search/label/RF Probe ) 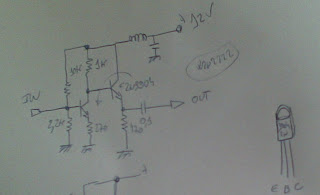 Not bad hum? Considering the the box isn't closed and there are led's working as varicap's in the circuit.... also no capacitor was chosen for their thermal characteristics, only for their value.

There is some cw in the video background (this vfo was not connected to the radio), I was trying to copy the "no power transmitter" Atlantic crossing (http://soldersmoke.blogspot.com/2009/11/aa1tj-code-talker-on-maine-coast.html) but I guess this transmission was not them...
Publicada por Ricardo - CT2GQV em 9:24 AM No comments: 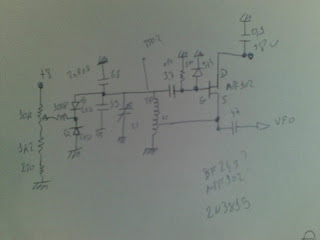 For my FT-102 I have been using the FT-107 VFO but it's like killing flies with a cannon since I make no QSO's at the moment and it could be used for the FT-107. After decided to use an homebrew vfo it's time to build one.
Transistor is a 2N3819 (no MPF102 in the "LES", local electronic shop). Variable capacitor is salvaged from an old radio and honestly I didn't measured it, also the capacitors of the tuned circuit were more or less dropped in the circuit til I have the 5-5.5 Mhz range. Toroid core is an T50-2, black and red with 30 turns and "middle" point at around 8 turns from ground. wire is 24 swg.
I reduced the power supply to 6v to try to improve on the stability. Since I didn't measured before I can't give you info if it did improve!
The "varicap" diodes are 2 red led's and give me around 10Khz offset in the highest vfo frequency (around 5.6Mhz). It tunes from around 4.9Mhz.
You can see in the video the initial drif. I hope that after placed in a box it will get betther. Anyhow made some tests after warming up (and the frequency counter removed) and it doesn't look that bad.

Not finished yet since I still need to put the buffer and find a nice box, will do that when needed. 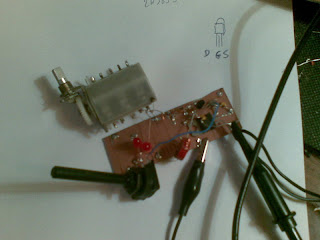 UV916 tuner receiver based - Some tests

it's not complete but can't wait for it so made some tests, although not exactly very scientific but just to check if there is some signal on the output of the tuner.
I am not quite sure on what is the default frequency on the tuner since the programing part is not yet finished but since I get some signal (read: interference) out when there's some input it's a good sign.

Another video of what output looks like (actually sounds like) when I inject 88Mhz (I suspect it could be some harmonic here).