The "Speaky" comes standard with 5 band module slots, I wanted a little more.

Here's the idea, five original modules in the right and five more on the left.
At this point (on the next photo) I only had soldered the support for one additional module on the left (with my crude 20m module just for testing). 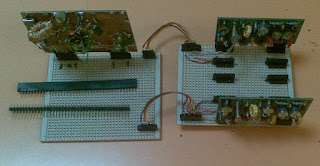 First live tests when I realized I had incorrectly wired the jumper cables between the two boards: 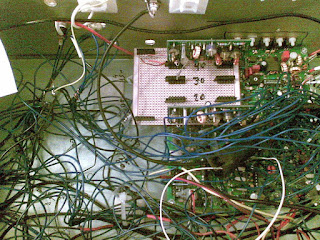 Still have to rewire the expansion (for the bandpass filter) cable (lower left on the "veroboard").
Also realized I don't need to duplicate all five original support mounts, just need to parallel one of them to the expansion board, sparing some "veroboard" for other projects. Again I went to fast from idea to solder...