Saw this schematic somewhere and decided to give it a try. 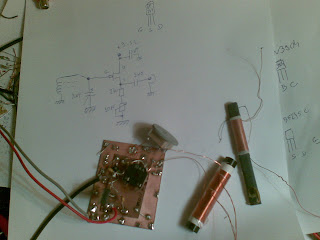 Honestly I only changed the output cap to a 2nF (didn't had 1.5) and don't think it will influence a lot. The variable cap and the smaller ferrite was salvaged from one of those "pound shop" like radios. Anyhow neither of the ferrites tested gave over the average results probably by being near the table with lots of cables around and not in the open.
Conclusion, it works but I will try to make another type of antenna for NAVTEX reception on 500Khz probably with some design similar to a very shorted 160m vertical antenna with a load coil. The idea is to replace a loop that I built some time ago that takes to much space and not practical to rotate.
Publicada por Ricardo - CT2GQV em 5:34 PM