Got an frequency generator kit from a fellow ham locally (That was king enough to let one part go) which in turn he had got from "Kees" http://www.qsl.net/k5bcq/Kits/Kits.html
This kit is based on the Si570 chip and has an LCD, it can be programed to show offset or multiplier (for softrock radios). Mine is an CMOS version.

The idea was to have an stable VFO for the VHF airband receiver.

After powering up and verifying it was on frequency it was time to connect it to the TA7358, first mixer on the receiver. 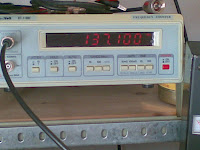 I sent some emails to people I know have this kit but they only used it on the Softrock receiver without "normal" mixers like SBL-1, SA602 or TA7358, technically it should drive the SBL-1, but SBL's are on the expensive side and I had none in the junk box. So after thinking how to connect and many calculation later I found a way....(was joking about the calculation part). I decided the try and error method.
For the first time it worked at first.... just connected an 50 ohm resistor in series with an 10nF capacitor between clock + output on the kit and pin 8 on the TA7358.

This was on a little spare time I got so no further testing was made, but, I did listen to packet on 144.8 and some broadcast on 104Mhz. If your are trying to duplicate this please don't connect the varicap part on the airband receiver schematic! Obvious I think!

I still can only listen to FM modulation, no AM, I will check further to see what is the problem.

p.s. Found the "AM" problem....no problem at all, it's lack of sensibility on the filters (I think). If the signal is strong enough, it copy's good but noise to audio signal relation is low...

There is 3khz difference between the generator and the frequency counter.... so... which one is right ? :) reminds me that one of this days I have make an frequency standard generator for calibration.
Publicada por Ricardo - CT2GQV em 12:05 PM