Happy New Year!
I'll try this year to post more project's, (at least one for each month) and some more simple ones in the middle, that including the failed experiments (I do have them).

Said so, here's, with some delay, the first post for this year!

I had the RTL-SDR USB dongle for some time working but wanted to box it up and placed together with the Raspberry Pi already boxed up.
In the process wanted to eliminate some of the noise it was receiving. Keep in mind that even with noise it was working acceptable (just wanted it mostly for ADS-B and possible AIS reception).

So, decided to do some simple filtering and placed it on a full metal box.

In order to know the filter/shielding was working correctly, that is, the design was improving reception I used the QspectrumAnalyser Linux software to get the signal data in a small band subset and then compare on the several stages during filtering/boxing.

The final result of the build is this: 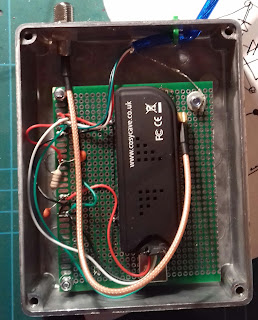 The noise reduction part is by the end of the post.

Here's already with the Raspberry Pi: 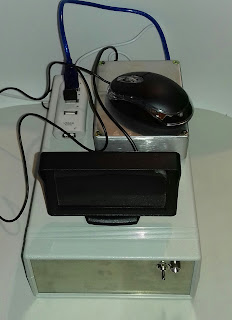 And the live feed with a random piece of wire as inside house antenna: 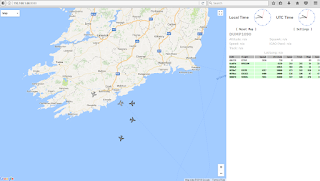 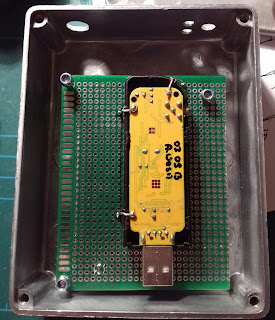 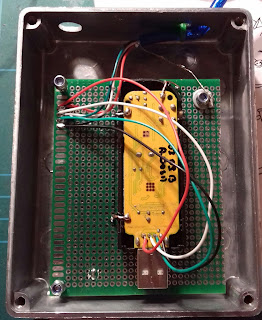 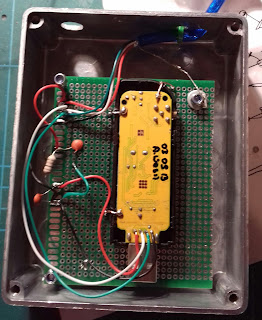 After connecting to the Raspberry was getting USB disconnects but not if I used it on the Laptop, after twisting together the USB signals cable (green and white ones) it stopped doing the behavior. 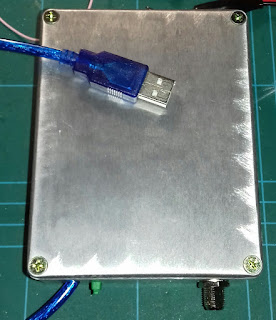 Now the good part, the schematic for the filtering:

I was looking for ideas here and here , were not tested since I started building the above circuit and it worked first time, to be fair there's nothing that can go wrong with it.

2 - With the output capacitor after the inductor, we can see a big reduction:

3 -Here's me holding the USB ground terminal to the box, I am the antenna!

4 -Then soldered the USB ground to the box

5 - With the full PI circuit, much better:

6 -With everything connected, except for the top lid of the box.

Additionaly some experiments in logging data from the dump1090 software: 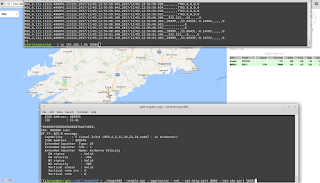 I'll probably do in the future a a small post on that.