Done, but the switching (pin) diodes are standard rectifier 1n4007, it works and for now enough.
I tried to replaced the original schematic varicaps by BB909 type I bought in bulk and.....works nice, although specs are a little different in terms of ratio, but not capacity.
The paint job on this BB909 is not their best feature and after scraping the paint a little bit I can see a diode similar to 1n914 and 4148. I suspect it's some re-branding by the manufacturer which is specialized in hard to find components.

30m band is in prep, oscillator crystal already in place but I suspect will take some time to finish this one....

The Speaky with 5 band modules (2 unfinished): 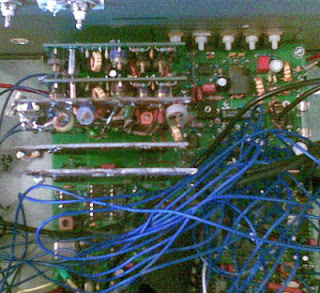 Also finished the antenna tuner with coil connections for the present "Speaky" bands: 40, 20 and 17m. It also tunes 80m if needed on my piece of wire antenna (something that resembles an dipole :).